Celestial Event of a Lifetime: The Great Conjunction of Jupiter & Saturn 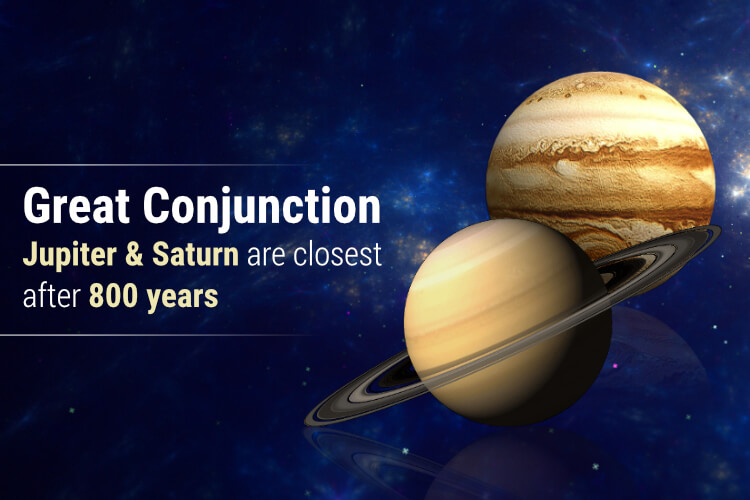 Time’s Person of the Year for the year 2006 was ‘You’, meaning everyone. However, the boasting rights of that in front of your future grandchildren are about to be overshadowed by something outrageously special than that. The world is about to witness an event for the centuries when the Great Conjunction of Jupiter & Saturn will bring these two planets closer than less of a degree. Yes, you are about to witness a celestial event which happens once in about 800 years!!! The Great Conjunction happens every 20 years for Jupiter and Saturn, however, this year the planets are coming the closest they have been since 1226 AD. The telescope wasn’t even invented then!

During this event on 21st December 2020, the planets will come so close to each other that the star-alike dots we see of them in the sky will merge into one. Every 800 years or so, this phenomena happens when the Earth, Jupiter, and Saturn are aligned in one straight line. Moreover, it can be seen from any part of the world. In space, there is more distance between Jupiter and Saturn than it is between Earth and Jupiter! However, we can see together as the overlapping dots only every 800 years because of the Earth’s perspective and the alignment of the planets. 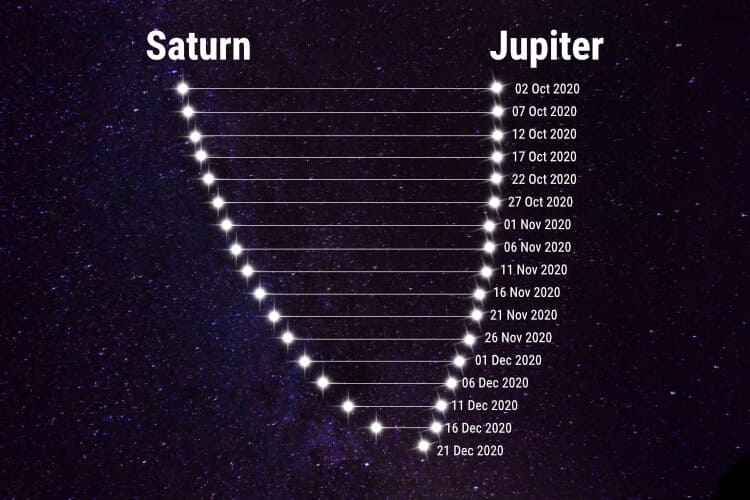 How does the Great Conjunction of Jupiter & Saturn take place? Let’s understand: You must know every planet orbits around the Sun. We have defined one year for the time Earth takes to complete one revolution around the Sun. Similarly, Saturn takes 29.4 Years to complete one circle around the Sun, and Jupiter takes 11.8 Years. Since Jupiter is closer to the Sun, it takes less time to circle the orbit. That is why, when we see it from the Earth, Jupiter seems to travel faster than Saturn.

Because of this difference, every 19.8 Years, Jupiter crosses the slow-moving Saturn in Earth’s sky. These two giant balls of gas appear to come together before the day of conjunction and cross their places. Last time when it happened in the year 2000, both the planets were too close to the Sun and weren’t visible because of the Sun’s glare. This time, however, it is different.

Why is the Great Conjunction of Jupiter & Saturn in 2020 Special?

Because of the placement of the planets in space, not every great conjunction that happens every 20 years see these planets this close. As seen from the Earth, Jupiter & Saturn will be only 0.06 degrees apart, which basically will make them look like one single giant star. Since they overlap during the event, it is also called ‘double star’ or ‘double planet’.

However, it is important to know that the planets don’t ‘twinkle’ like stars but shine steadily as they are closer to the Earth than the Stars. This makes them even easier to find in the sky. 400 years ago, a similar event took place during the daytime and the telescopes were just invented then. So it would have been impossible to capture the event with a telescope. This year’s event is the same replica of what happened in 1226, around 800 years ago. That event also took place at night. 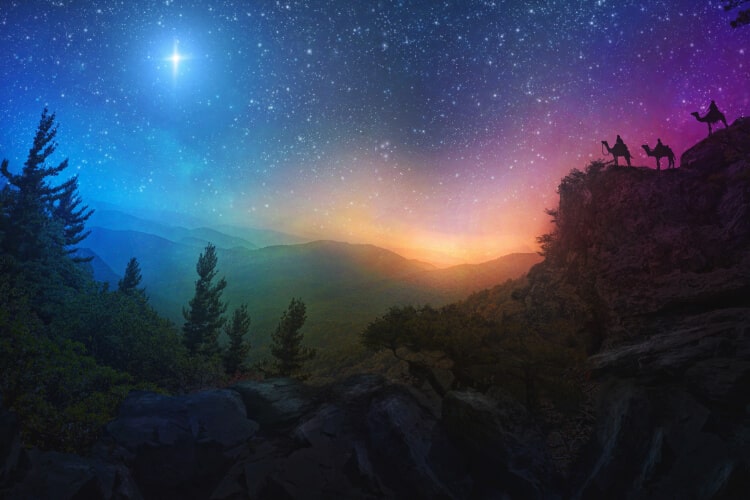 One such event of the Great Conjunction of Jupiter & Saturn happened in 7 BC. During that event also, Jupiter and Saturn would have been visible as a single celestial body. This, by the historians, is believed to be the Star of Bethlehem. The ‘Christmas Star’ that guided the wise men to Jerusalem, Jesus’s hometown, to worship the Lord. The Great Conjunction of Jupiter & Saturn in 2020, which is happening just four days before the joyful festival of Christmas is an exciting thought to ponder in itself!

An Eventful End to an Eventful Year: Astrological Impacts

Jupiter and Saturn are the largest planets in our solar system, and subsequently, their impacts on our lives are large, too. Moreover, Jupiter is the second brightest planet in the sky. When these giants come together, the fireworks are bound to show up. What effects will the Great Conjunction of Jupiter & Saturn have on us? Let’s find out.

The Conjunction of Jupiter & Saturn is about to take place in Aquarius, ridiculously close to another prominent astrological event, Mars Transit to Aries on 24th December, three days after. Since Jupiter and Saturn are this close after about 800 years, it is bound to bring the changes on that scale. As we mentioned, these are two of the largest planets of the Solar system. In that regard, they are considered the heads of the family. However, their modes of operation cannot be any more different from each other.

Jupiter is the teacher that guides us to the right paths. It represents the perspectives and new insights. Jupiter is also the planet of wisdom and bestower of knowledge. On the other end of the spectrum stand the mighty Saturn. Saturn represents rules, regulations, and justice. When they are together in Aquarius for around a year, the battle is going to be legendary.

As we can see from the characteristics they represent, Saturn is a strict planet. Saturn is labelled as the planet that serves the ‘Karmic’ justice. It imposes justice the hard way, and that is why it is feared the most. If you think Saturn is affecting you in a negative way, you can book a Hanuman Puja performed by our expert pandits to get rid of the ill-effects of this ringed planet. For Jupiter, the planet is considered as the ‘Guru’, a benefic planet in general.

Both the planets show no friendliness or enmity towards each other. Also, it is important to note that the Great Conjunction of Jupiter & Saturn in 2020 is going to take place in Capricorn for Vedic Astrology. Also, the Effects of Jupiter & Saturn Conjunction on every Zodiac Sign will be different and bring drastic changes in various aspects of life.

Watch It, But Watch Out!

To be a part of a historical celestial event of this calibre is no mean feat. The great conjunction will be seen an hour after the Sunset in the southwestern skies. Consider yourself fortunate, as an event happening once in 800 years will be visible in a clear sky. However, a number of changes and challenges in your life and zodiac sign can come your way due to the Great Conjunction of Jupiter & Saturn’s astrological significance. A hurrah for all of us, for being part of history. Cheers!