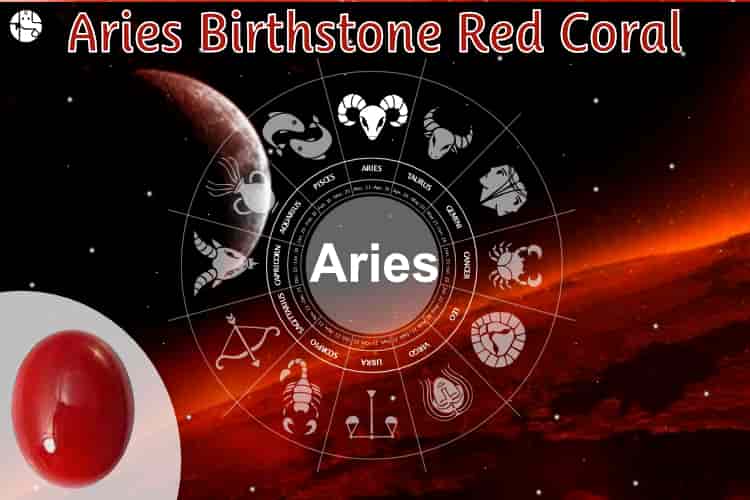 Red Coral, the Aries birthstone, has descended from Mars. Every person who takes birth in the Aries Horoscope can reap immense benefits from the amount of abundance it holds.

Everyone and everything in this universe has an individual existence but are still connected to each other. Everything drives energy and powers from the universe. Every living being is in complete harmony with the heavenly bodies who continue to exert their influence on us in many ways.

Astrology says there is a direct link between the time of the birth of an individual and the movement of planets. Gemstones like planets are endowed with cosmic vibrations and colours. Both of these can eventually balance each other to the advantage of the people.

People born under the Aries Horoscope are usually quite courageous, financially sound, respectable yet aggressive at the time. Known for the fire they hold within, they are quite straightforward. As fire is always pure, so the Arians are known for their candidness.

The purity of their heart and thought often reflects in their dealings despite the presence of any adverse energy. Aries in ancient times was accorded a diving status; it is the sign of Lord Ram. Hence Aries comes with a strong sense of achievement and stay put towards their goals.

Aries Horoscope is ruled by the Red planet Mars which is also known as a fiery planet. Mars constantly adds more fire, more energy, and at times, makes you act rashly. This also lends a touch of stubbornness in temperament, which often leads to rage. The tendency to make rash decisions often invites an enhanced possibility of failure.

The Aries Birthstone, Red Coral, has charismatic properties to help the Aries person tide over all negativities and achieve great heights.

Let us explore some of these benefits of Aries Stone:

• Red Coral helps an Aries person to keep the anger at bay and effectively deal with other issues in temperament derived from the fieriness of the Red planet.
• It has also been found useful in overcoming the Mangal Dosha and hence bring in more harmony in marital life.
• There are many health benefits also associated with it. Red Coral is found to possess many healing properties which are useful in jaundice, anaemia, piles, indigestion, etc.
• Apart from the above, it also protects from all the negative energies prevalent in nature.
• It also brings in many financial benefits and ensures security.

Let us Ask our Experts about some specificities of wearing Red Coral.

Can Mangal Dosha be cured by the Aries stone, Red Coral and the person can marry a Non-Manglik?

Gemstones play a vital role in boosting the role and influence of planets in one’s life to get the desired results. Red Coral is the basic gemstone for the planet Mars, which is also the ruling planet for Aries and Scorpio sun signs.

Mangal Dosha is also due to Mars and hence can only be cured by remedies derived from Mars only. The Red Coral helps to curb the negative effects of the planet and boosts the good energies of the same. Being related to a sensitive and critical aspect of one’s life, Mangal Dosha has often been associated with many misconceptions and false rumours. On the contrary, after thoroughly performing all the remedies, the negative effects of the same can be cured, and harmonious life can be led.

The marriage prospects between a Manglik and a Non-Manglik person are also bright if all the aspects related to Mangal Dosha are prejudged for achieving good results. In addition, there are many remedies available for a reduction in the negative effects of the same.

A Red Coral only meant for Aries Horoscope. What will happen if it is worn by people with other sun signs?

Red Coral is not just meant as the Aries horoscope birthstone but also can also be worn by other ascendants which are friendly to Mars-like the Sun, the Moon and Jupiter, all three of which are friendly to Mars. So gemstones can be worn if the natal chart is having signs related to its friends. Primarily you are required to understand the basic characteristics of the gemstones. If any incorrect or antithetical gemstones are worn then it results in unfavourable results to the native.

Is there any specific technique or requirement to wear the Red Coral?

Every gemstone has a proper and well-defined technique to properly activate all its energies as many gemstones have to undergo a lot of processes including mining, and polishing to reach the final hands of the native. These are usually in the dormant state and need to be energized before being worn.

Can a Red Coral be worn along with any other gemstone?

It is important for you to know that when any planet gets the support of a friendly planet, the power of the planets is boosted and one gets the auspicious results beyond expectations. Thus, all gemstones friendly with the Red Coral give positive results only and can be worn with full confidence.

Aries stone, the Red Coral has a lot of abundance and energy promised for the people who come under the Aries Horoscope. The infamous Mangal Dosha also gets its cure from it. Red Coral needs to be energized by rituals and mantras to activate its energies. It is usually worn in the Ring finger either in Gold or Copper. Arians derive their energy from Mars and fire. Ferocious as both are, they lend their basic characteristics to the people. This can lead to many disruptions in life, which can be handled with the right gemstones.

For more personalized solutions to your problems, you can talk to our Astrologer.