Know About Kalki Avatar, The Upcoming Avatar Of Lord Vishnu 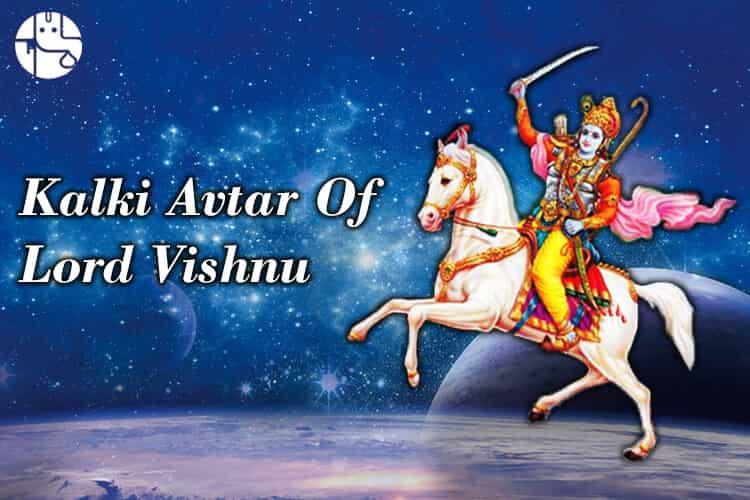 It is believed that whenever evil gains the upper hand over the good, then Lord Vishnu would incarnate to vanish the evil energies. As per Hindu mythology and philosophy, there are ten major avatars of Lord Vishnu, the god of preservation. Lord Vishnu is the preserver of the universe and part of the Hindu Trinity – Brahma, Vishnu, and Mahesh. He is the Lord of protection, preservation, and dharma restoration. According to the beliefs, Lord Vishnu takes the avatar on the earth in difficult times to restore the balance of good and evil. One such avatar of Lord Vishnu is Kalki Avatar. Here we are going to reveal lesser-known facts of Lord Vishnu’s incarnation – Kalki Avatar.

As per Srimad Bhagavat, Lord Vishnu’s avatar would appear on Earth at the end of the Kali-yuga and at the beginning of Satya Yuga as Kalki Bhagwan. Hence, when evil becomes the predominant reality of the Kali Yuga, Lord Vishnu will come to Earth in human form – Kalki Avatar, to rescue humankind and reinstate the cycle of time and commence Sat-Yuga afresh.

In Hinduism, four yugas are supposed to exist: Satya Yuga, Treta Yuga, Dvapara Yuga, and Kali Yuga. The following are the names of the ten avatars of Lord Vishnu (including Kalki Avatar):

According to the mythology, Bhagwan Kalki will appear at the time when Kali Yuga reaches its worst phase. It is believed that the Kali Yuga is currently in progress. It is believed that in Kali Yuga, one will get rewards based on his past karmas. In Vedic Astrology, Planet Saturn is represented as the planet of Karma and brings rewards and challenges in your life based on your past Karmas. The unfavourable position may bring challenges in your life.

According to Puranas, Kalki, also known as Kalkin or Karki is the upcoming and last avatar of Lord Vishnu. He will recycle time by ending the Kaliyug and re-initiating the Satya Yuga. He will be the one who will rejuvenate existence by ending the Adharma and ushering in the Satya Yuga. However, the predictions made about the Kalki avatar are inconsistent among the Puranic texts. For example, he is just an invisible force destroying evil in some texts, while an actual person who kills those who persecute others in other texts, and some texts portrayed him as someone leading an army of Naga warriors to eliminate Adharma from the world as per Kalki predictions. Furthermore, his story has been compared to the concepts of Messiah, Apocalypse, Frashokereti, and Maitreya in other religions.

When And Where Will Kalki Birth Take Place?

As per the beliefs, the Lord Vishnu would descend on earth as a Kalki avatar to vanish evil on the day of Shukla Paksha Sashti of Shravan month (sixth lunar day of the Moon’s bright fortnight during July – August). However, the time indicated for Kalki’s arrival in some ancient Hindu scriptures is ‘21 fortnights from the birth of Krishna’ while in another as, ‘Margashirsha month, Krishna Ashtami, 8th day after full moon’.

The Shrimad Bhagwat Purana describes in detail the avatar of Lord Vishnu. In the second chapter of the 12th wing, there is a description of Lord Kalki. It is said that Lord Kalki will be born as a son in the house of Brahmin named Vishnuyasha at a place called Sambhal in the Moradabad district of Uttar Pradesh. He will destroy the sinners from the world by riding on a horse or vehicle named Devadatta and re-initiate Sat Yuga.

It is said that Lord Vishnu was once cursed by saint Bhrigu. Once Asuras took shelter in the ashram of Sage Bhrigu. One day when Sukracharya and Saint Bhrigu were not present in the ashram, at that time, Devtas and Indra decided to attack the unarmed Asuras.

The Asuras escaped and ran to Kavyamata (wife of sage Bhrigu) for help. She, with the help of her Yogic powers, saved asuras from the Devtas. Indra and other Devtas immediately went to Lord Vishnu for help. Later, Lord Vishnu used his Sudarshana Chakra to cut down the head of Kavyamata for saving asuras.

When Maharshi Bhrigu returned and saw his wife, he got very angry at Lord Vishnu and cursed him that he will have to take birth on earth several times and suffer the pain of the death of near and dear ones. It is due to this curse, Lord Vishnu had to appear on Earth again and again, and whenever he arrives on the earth he destroys the evil on the earth.

Generally, Lord Kalki is depicted as an aggressive warrior adorned in war attire and galloping in a majestic white horse Devadatta, holding a blazing sword in his hand.

Mention Of The Lord Kalki In Vedas And Puranas

There is no mention of the Lord Kalki or the Kalki Avatar in the Vedas. But at the same time, the term “Kalmallkinam”, meaning “brilliant remover of darkness”, is found in the Vedic literature for Rudra (Avatar of Lord Shiva), which is stated to be the “forerunner of Kalki”. Moreover, Kalki also appears in Mahabharata and Puranas. In fact, Lord Kalki is mentioned first in the great war epic Mahabharata.

However, the mention of Kalki in the Mahabharata occurs only once, over the verses 3.188.85–3.189.6. Besides, the Kalki avatar is also found in the Maha-Puranas like Vishnu Purana, Matsya Purana, and Bhagavata Purana. However, descriptions of Kalki mythologies are divergent between the Epic and the Puranas, as well as within the Puranas, as per Vishnu Kalki’s avatar story. Furthermore, there is a small text named Kalki Purana, which is a relatively recent text, likely composed in Bengal. Its dating is around the 18th-century. Wendy Doniger dates the Kalki mythology containing Kalki Purana to between 1500 and 1700 CE.

To know more about the interesting facts of Indian mythology and Hindu Astrology, Indian Vedic Astrologer !

According to the Kalki Purana, Kalki marries princess Padmavati, the daughter of Brhadratha of Simhala. He fights an evil army and many wars, ends evil but does not end existence. Kalki then returns to Sambhala, initiates a new yuga for the better, and then goes to heaven.

Idols of Kalki, as a horse-riding warrior and even as a horse-faced divinity, are worshipped in many temples. Moreover, many believe that the deity Karuppaswamy is the representation of Lord Kalki. There are many Kalki mandir or temples, especially in villages, called Kalki Karuppaswamy temple. It is believed that worshipping Lord Kalki in this Kali Yuga will help you attain health, wealth, and prosperity. It will vanish evil energies and bring happiness into your life.

To Get Your Personalized Solutions, Talk To Astrologer Now!