Celebrate The Glory Of Sita Navami 2023 And Receive Divine Blessings 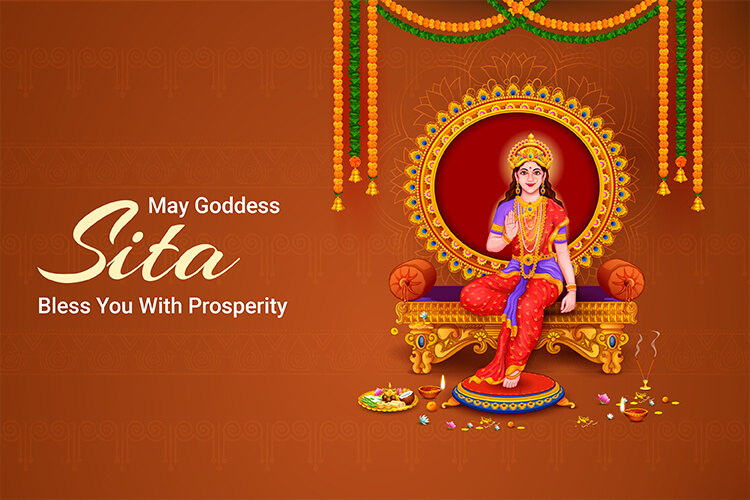 Sita Navami is celebrated as the birthday of Sitadevi, the embodiment of Goddess Lakshmi and spouse of Lord Rama. This day is also well-known as Sita Jayanti or Janaki Navami. It is said that Goddess Sita emerged in front of King Janak who rescued the child and looked after her as his daughter. Let’s read more about Sita Navami 2023.

Sita Navami is celebrated on the Shukla Paksha, the waxing phase of the moon and Navami Tithi, the 9th day in the lunar month of Vaishaka of the Hindu calendar.

Get your personalised Janampatri to know about yourself in detail.

Sita Navami is well-known among married women who conduct fasting on this day for the longevity of their better half. It is observed as a terrific celebration with colossal fervour and dedication in Ayodhya, the place in Uttar Pradesh where Lord Rama was born, Bhadrachalam in Andhra Pradesh, Rameswaram in Tamil Nadu, and Sita Samahit Sthal in Bihar.

Sita Darshan, Aarti, and Maha Abhishekam are the huge customs that invite the positive quality of Goddess Sita on this land. Enthusiasts participate in a major parade in reverence of Sitadevi, Lord Rama, Lord Hanuman and Lakshman. They read the Great Epic ‘Ramayana’ by assembling at the temples of Lord Rama. Bhajans (devotional songs), and Aarti are a portion of the significant magnetism of Sita Jayanti.

It is said that Sitadevi took birth during Pushya Nakshatra. And, Lord Rama had also taken birth in the same propitious period in the Hindu Chaitra month. Mata Sita was born on Tuesday, while Lord Rama was on Navami Tithi. Additionally, Goddess Sita and Lord Rama’s wedding was conducted during Shukla Paksha of Chaitra month. Sita Jayanti comes precisely following one month of Rama Navami as per the Hindu calendar.

In the event that Pushya turns out to be your Nakshatra or birth star, you are ruled by the planet Jupiter, the Lord of heavenly knowledge. Nourishment is the nature related to an individual born under Pushya Nakshatra. As Sitadevi took birth during this time on the earth, she was sensible, modest, genuine and stayed devoted to Lord Rama.

Men born under this period are self-regarding. They are curious about others’ opinions about you. They don’t think upsides and downsides prior to beginning any work. They aren’t aware of their expertise, strength, and capacities. But in all, they love to move forward until they achieve success.

Women born under this time are delicate, sweet, and reverential individuals. They should stay mindful of their well-being as there are chances of suffering from health issues. In the event that you took birth on Pushya Nakshatra and are a newly wedded Hindu lady, you are fortunate. In any case, to boost your luck, you ought to appease Sitadevi and perform Sita Navami puja for the longevity and victory of your life partner.

Observing Sita Navami ceremonies with dedication would help you bring well-being, riches, and joy. Married women are likely to pull in characteristics like penance, humility, motherhood and devotion.

It is one of the primary customs during Sita Jayanti to chant the holy mantra for at least 108 times: ‘Om Shri Sitaye Namah’.

Chant the below stotram of Goddess Sita on this day:

Meaning Of The Stotra:

Oh, divine Mother! We ask you to come in front of us. Bowing down to you, we welcome you. O’ Supreme Goddess, enriched with supreme treasure and vibes! Please show your kindness and generosity to us and finally be the harbinger of auspicious outcomes for us!

May Goddess Sita bless you with a beautiful life. Happy Sita Navami.

Attract Good Luck With Your Personalised Horoscope On The Auspicious Day Of Sita Navami! – Get Your Free Consultation!
With Ganesha’s Grace,
The GaneshaSpeaks.com Team
Astrologers trained by Shri Bejan Daruwalla.