Observe Mohini Ekadashi Vrat This 2022 And Get Blessings Of Prosperity 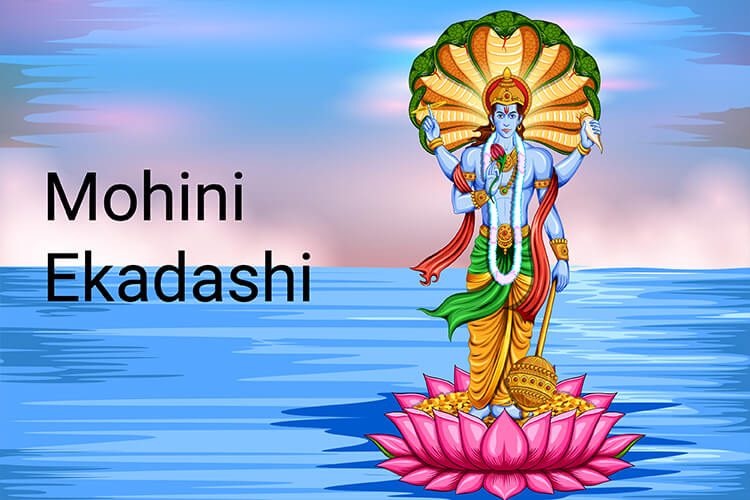 As per the Hindu time schedule, Mohini Ekadashi 2022 is approaching and celebrated among Hindus. The main aim of this festival is to wash away any ill deeds done by an individual, along with those carried out in their past lives. According to Indian practices, Mohini is the name given to the hidden expression of Lord Vishnu. The Lord showed up in this appearance on the Ekadashi tithi, hence this day started to be remembered as ‘Mohini Ekadashi’.

This day is observed in the Vaisakh month among North Indian parts and surrounding areas, however; according to the Tamil calendar, it falls during ‘Chithirai’, while it occurs during the ‘Jyestho’ month of the Bengali schedule, and in the Malayalam schedule, Mohini Ekadashi takes place during ‘Edava’. Hindu enthusiasts celebrate this event to receive divine grace for leading a joyful and prosperous life.

Get your personalised Janampatri to know about yourself in detail.

It is believed that when one observes Mohini Ekadashi Vrat with complete commitment, they can gain such great karma (punya) that can not be accomplished even by travelling to pilgrimage places or doing noble works. The individual who conducts this fast gets as many rewards as receiving them when donating 1,000 cows. The person also gets liberated from the ceaseless pattern of birth and death, thereby achieving salvation. Hence, this occasion is extremely revered in Hindu religion.

The Hindu folklore says that on the day of Mohini Ekadashi, Lord Vishnu had appeared as Mohini. When Amrit (Nectar) was found during the Samudramanthan (chiring of the sea), a question arose between Devtas (divine beings) and Daityas (devils) on who could have it. At that point Vishnu appeared as a delightful lady, Mohini. Daityas (demons) continued appreciating the charm of Mohini, while the Devtas drank the Amrit at the same time. That is the reason this day is known as Mohini Ekadashi.
Lord Rama had also conducted the fast of Mohini Ekadashi while looking for Sitadevi, and furthermore by Yudhishthir during the time frame of Mahabharata. Subsequently, they were soothed from each of their sufferings.

As per the ancient texts, there was a region called Bhadravati on the banks of Saraswati river, which was administered by King Dhrutimaan. He was exceptionally a devout follower of Lord Vishnu. Among his 5 children, the fifth one, Dhrishtabuddhi was a miscreant. He got into immoral acts with ladies, betting, and furthermore indulged in taking meat and liquor. As a result, the ruler got disturbed and deserted him. From that point, Dhrishtabuddhi lived through the days by selling his jewellery and garments. But later, being troubled with thirst and craving, he showed up at the Ashram of Sage Kaundinya.

Around then, it was the month of Vaishakh, and the Sage was taking a bath in Ganga river. Due to this, water beads sprinkled from Sage Kaundinya’s wet garments on Dhrishtabuddhi and he became intelligent. At that point, he admitted all his wrong doings in front of the Sage, and begged him for a resolution of achieving salvation from his deeds. In this way, Sage Kaundinya encouraged him to do fasting on the Ekadashi of the Shukla Paksha to purify all his sins. Eventually, he got liberated from his ill deeds by observing the fast, sat on Garuda bird and arrived at Vishnu Loka.

Are you facing any ill effects in your life? Access your personalised Remedy Suggestion Report from experts and come out of problems easily.

The individual observing Mohini Ekadashi Vrat must obey the below rituals from the previous night (the 10th Lunar Night).

Avoid These On Mohini Ekadashi

Attract Good Luck With Your Personalised Horoscope On The Auspicious Day Of Mohini Ekadashi! – Talk To Expert Astrologer Now!