Know About The Three Gods Of Hindu Trinity 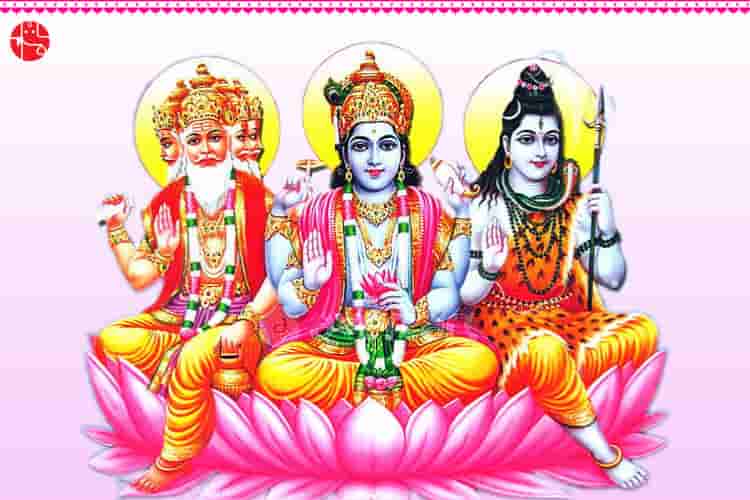 Indeed, imagination and visualisation are the two most potent strengths of human identity. So many things have come out by the influence of these two magical abilities. Thus, the human mind has actualised profound spiritual truths to get peace & liberation (from mundane sorrows) and also invented the super marvel called science to upgrade the material quality of life and (enhance physical) convenience. Well, there is no end to human imagination. Perhaps, it is as infinite as the universe.

And several scholars opine that all imaginations do exist, they can be brought to life by following the right conditions. Many say that mythology is not fictitious; instead, it is a realisation and actualisation of the human mind. We wanted it, needed it, believed in it, so it has come to exist. Like so many other religious traditions, Hinduism too is full of legends, stories and various forms of ethical and philosophical literature. One of the most defining elements in Hinduism is the belief in the trinity of Brahma, Vishnu, Mahesh (popularly known as Shiva). Know more about Indian tradition. Read Indian Vedic Astrology.

The Role Of Hindu Trinity In The Play Of Existence

Well, the three Gods of the Hindu trinity are said to function in a complementary fashion in the play of existence, as per Indian mythology. While Lord Brahma has created the world, Lord Vishnu sustains & preserves it, and Lord Shiva will eventually dissolve it and end the existence as in Hindu mythology gods. It is also said that apart from being three Gods, the Hindu trinity represents three aspects of time and space. Thus, all material things (including the human body) are bound to undergo the three stages (birth, sustenance and death). It is further believed that one has to rise above the three (Brahma, Vishnu and Shiva) and eventually get absorbed into the universal reality, which is beyond birth, preservation and death.

Brahma: The God Who Was Born From A Lotus Flower

The Lord of creation, Brahma, is shown with four heads, each of them with crown and beard. The four heads are facing the four different directions. Besides, he has eight arms, in which he carries the following: 1) the four Vedas, 2) a rosary, 3) a pot with holy water, 4) a sceptre, 5) a spoon, 6) a disc, 7) a fly whisk, and 8) a lotus flower. It is stated that his heads came from the four Vedas.

As per the legend, Brahma was born from a golden egg or a lotus flower that came out from Vishnu’s navel, when he tilted his position on a snake on the ocean waves during his cosmic sleep. It is also said that initially, Brahma had five heads, which he acquired when he fell in love with Saraswati, and he wanted to see her in whichever directions she went. Some also say that the four Varnas (castes) came from different parts of Brahma’s body.

Vishnu: The Lord Of Incarnations And Involvement

As for Lord Vishnu, he is worshipped in the form of incarnations (i.e. avatars). At times, he is seen to represent all the gods in one. Besides, Lord Vishnu is shown with other gods like Agni, Indra, Yama, and so on. Besides Lord Jagannath is a reincarnation of Lord Vishnu. As per the tradition, Lord Jagannath was created by a celestial carpenter who shaped the deity, his brother and sister from a miraculous log. The wife of Vishnu is Lakshmi.

Lord Vishnu has come to Earth in human form to re-establish righteousness and eliminate evil. His 10 incarnations are as follows: 1) Matsya, the fish incarnation who saved the first human from doomsday; 2) Kurma, the tortoise incarnation who forms the base for the mountain that supports the universe; 3) Vrah, a wild boar with a man’s body who holds the Earth goddess in his hands; 4) Narsimha, half-lion, half-man, who attacks the king of the demons; 5) Vaman, a dwarf who takes control of the earth, sky and hell and restores to gods the possession of the world; 6) Parashurama, the aggressive side of divinity; 7) Rama, the ideal human and the hero of the Ramayana; 8) Krishna, the supreme mystic and the hero of Mahabharata, 9) Gautam Buddha and 10) Kalki Avatar, a man-horse incarnation who is yet to come. By far the most important incarnations are Rama and Krishna.

Shiva: The Loving Deity, The Saviour Of Devotees

Well, Lord Shiva is quite different from Lord Vishnu, as per origin of Lord Shiva and Vishnu. While Vishnu has regal attributes, Shiva is a symbol of renunciation. He is often depicted as an ascetic, sitting deep in meditation in the vastness of the Himalayas. He is shown seated on a tiger skin, wearing loincloth with sacred ash covering his body, giving his skin a grey colour. His trident (trishool) is placed next to him, stuck in the ground. There is a snake around his neck.

His neck is blue in order to protect the world; he drank the poison that came out of the churning of the ocean to protect the world from a calamity. Shiva is often seen as a stern God, who had burnt up the Kama, the god of (sexual) desire, with a glance, when the latter had tried to disturb Lord Shiva during his meditation. Indeed, Shiva is a loving deity who can go to great lengths to save those devotees who are wholeheartedly dedicated to him.