Significance of Bhai Dooj 2022: A Festival for Brothers & Sisters 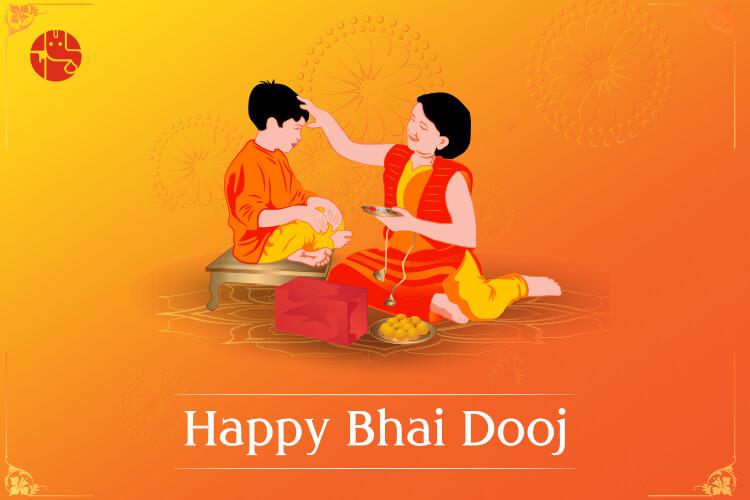 There are festivals of different significance all over the world. But the ones that celebrate the pure and pious bond between brothers and sisters are very far and few. Fortunately, there are two in Hinduism: Bhai Dooj and Raksha Bandhan. Today, we are talking about the former one. What is Bhai Dooj, the story behind the festival, and how is it celebrated? Let’s find out.

Bhai dooj or Bhai Duj is celebrated on the second day after Diwali. The meaning of Bhai dooj is signified in the name itself, as it celebrates the love between a brother and a sister. On this day, a sister prays for her brother’s life, success, and prosperity. At the same time, the brother showers his sister with gifts. Like always, there is an exchange of sweets, as well.
Many regions in India have many names for the festival. Here are some other names of Bhai Dooj:

The Bhaubeej celebrations in Maharashtra hold a special significance in many ways. Though a large part of India celebrates the festival during Diwali, some also celebrate Bhai Dooj a day or two after the festival of Holi. In many parts of South India, it is celebrated as Yama Dwitiya. Why Yama Dwitiya? Here is the story behind Bhai Dooj and why it is also called Yama Dwitiya.

Mythologically, there are two versions of the Bhai dooj festival. It is said that Lord Krishna met his sister Subhadra after he killed a demon named Narkasur. During this visit, she carried the puja thali, applied him tikka and then on this is a ritual which has been followed during Bhai dooj. This ritual is known as Bhai Dooj Puja Vidhi.

The other version of the story is that Sun God Surya married a girl named Samjna. They had twin children, Yama and Varni. However, Samjna found the Sun’s heat unbearable and hence left for the earth, leaving behind her shadow called Chhaya so that her absence is not felt.

Soon Chhaya had her children and started ill-treating Yama and Varni. Fed up with this, Varni came down to earth to become the river Yamuna, and Yama went to the underworld and became the god of death. After a few years, they began to miss each other, and Yama decided to visit Varni, who was so happy that she prepared a big feast to welcome her brother.

Later, when Yama was about to leave, he asked his sister to make a wish as he wanted to give her something. Varni, claiming that she had everything she needed, said she wished that on this day, which was the second day after Diwali, all brothers should visit their sisters, and sisters should pray for their brother’s happiness and long life.

What are some of the Bhai Dooj traditions you should follow? Here they are:

Procedures performed during pooja need to be accurate and precise; in case you are unaware of the rituals and procedures for the pooja, you can still conduct traditional Vedic Puja Online performed by renowned Pandits.

No matter where they are, the bond between them always keeps getting stronger. We wish you all a very Happy Bhai Dooj. May it bring you and your siblings’ long life and prosperity.