Will the Coles weather the storm of Ashley’s infidelity?

English singer Cheryl Cole is facing marital crisis after her two year old union with football star Ashley Cole, who has been rocked with claims of his infidelity. It was claimed that he had been unfaithful to his wife Cheryl Cole. This has left Cheryl shattered with gloom. Chelsea star Cole, an England international, was branded a love rat by hairdresser Aimee Walton, who claimed he cheated Cheryl following a drunken night out with his footballing friends.

Let’s excavate the future of their marital life through our astro analysis. 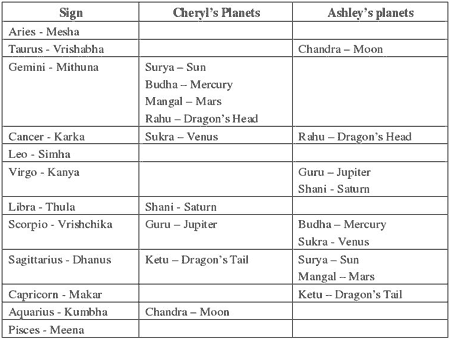 Guru is the lord of Ashley’s seventh house of marriage and partner. It is placed twelfth from its own house, which is a negative placement as regards to the fruits and happiness of marriage. Ketu is placed in her
seventh house of marriage, another highly tragic indication, while Shani aspects her seventh house, in addition to Surya, Mangal and Budha. All this denotes only one thing, her husband will be driven by many planets and her marriage will have many influences, and that of
separative nature.

Look at Ashley’s chart. Moon is the lord of his eighth house of sexual prowess and libido and is powerful due to exaltation. Rahu placed in his eighth house denotes a high powered libido and interests in things unofficial and impermissible. Budha, Guru, Sukra and Shani aspect his Moon, which implies that his libido has various moods and needs which one single lady may not be able to supply.

What Ganesha finds more striking here, is, that the negative aspects of planets to Cheryl’s seventh house indicate that she may not have a long lasting marriage and may leave the marriage.

When would happen next? Is the next big question that pops up in yours as well as Ganesha’s mind and the answer is, that one needs to wait for the year 2009. There is all probability that Ashley’s increasing infidelity may get on the nerves of Cheryl. And by the end of 2009, if they both separate, Ganesha would not be surprised and neither should
you all, including Ashley, if he does not amend his tastes and ways.