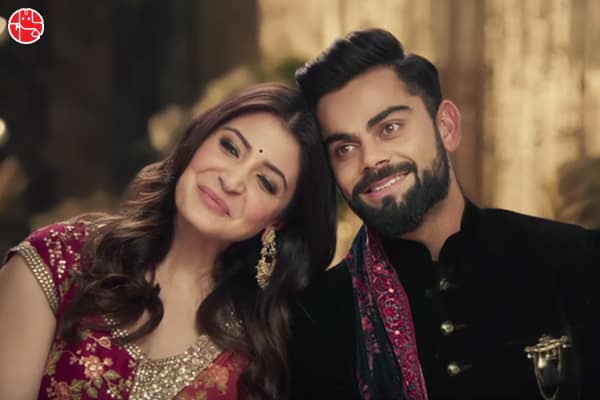 Nothing is more interesting than a happening romance between two youngsters. And when such a romantic engagement takes place between two celebrities, it gets all the more exciting. Yes, we are talking about the love relationship between Anushka Sharma and Virat Kohli, which finally got converted into marriage on December 11 in Milan, Italy. Well, theirs is a superb combination of two great looking people who also represent the two national obsessions; the glamorous Bollywood and the involving Cricket. They had been romancing for quite some time and even saw obstacles in their relationship. Now, as they are married, the big point is whether their love life will blossom all the more post-marriage. Ganesha has analysed their horoscopes. Continue reading to find their future married life astrology by date of birth:

Want For Stability In Relationship Foreseen

The natal Venus of both Anushka and Virat are placed in friendly signs. Venus is a signifier of love. Hence, they will seek completeness and depth in their romantic relationship. They may also go slow and give time to let their relationship reach a certain level of maturity. This indicates they may want to give a more stable shape to their relationship. They will share a good relationship. But how will be your marriage prospects? Buy the 2018 Marriage Prospects Report and know the answer.

Looking at the planetary placements in their horoscope, we can say that after marriage, their bonding and intimacy will be above average. In other words, they will share good compatibility. They will also get along well with each other’s family members. In fact, even their financial prospects will get better after marriage. Thus, we see that marriage will boost their prospects and make their life happier. Their marriage will be lucky. Are you curious about your personal life? Get the 2018 Personal Life Relationship Report and know your future.

Marriage To Boost Their Professional Prospects

The planetary positions in the horoscopes of both Anushka and Virat show that they will make gains and derive benefits out of their relationship. They will provide business opportunities to each other and thus help each other even in professional growth. In fact, if we go by what the planets say, their marriage will help both of them grow in a better manner than what they can grow without getting married. Their marital union will invite luck and prosperity as per Anushka Sharma marriage astrology.

Planets Will Decide Their Post-Marriage Relationship

However, there is an affliction in Virat’s natal Moon as per Virat Kohli birth chart, which is also as per his zodiac sign Scorpio. This may trigger emotional conflict and mental disturbances. Thus, after marriage, the relationship between them may not be sweet all the time. Also, the periodic Dasha sequences may play a major role in deciding the longevity of their marriage. In other words, planets will have a lot of say in their post-married relationship according to Virat Kohli marriage horoscope.

Both of them are passing through the Saturn return phase. Thus, the coming two years are significant for their relationship. They may tend to be more sensitive during this phase. Thus, they need to take good care of this point. Both of them will need to maintain a balance between their personal and professional lives as per the kundli matching of Virat and Anushka.

Caution To Be Exercised

If they are unable to maintain their balance and manage the relationship effectively, it may have serious consequences for their equation. There is an affliction in Virat’s natal Moon. If they decide to go individualistically and do not care for each other, it may have a very damaging impact on their relationship. If either of them is too uncompromising, it may even lead to their separation.

For More Personalised Solutions!
1) Anushka Sharma Predictions 2017: She Is Destined To Shine Bright As A Producer
2) Rohit Sharma 2017 Predictions: Destined To March Ahead But May Face Mental Confusion
3) Hardik Pandya Will Taste Huge Success In Near Future
4) Will Cheteshwar Pujara Retain His Shine? Find Out What Ganesha Says.