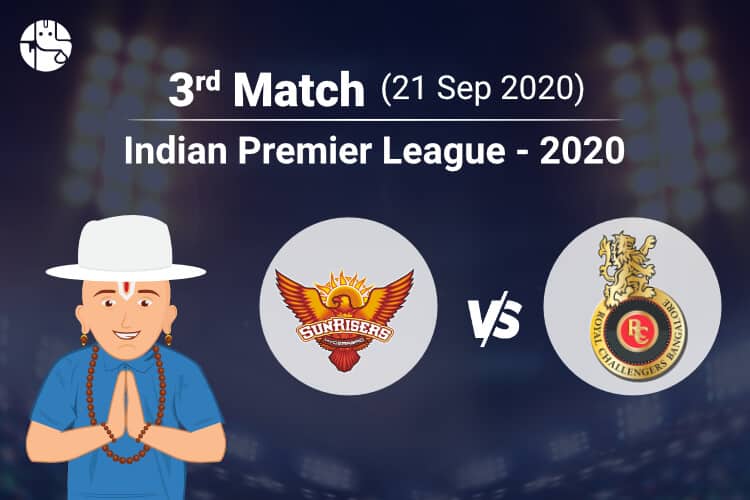 IPL 2020 is well settled now, and it is time for Match 03. Although the players from both the teams would be far away from settled for their first match of the tournament. Both teams are promising and on their day, they are as better a team than any of the Eight teams playing. SRH especially is known to kill silently, with disciplined cricket and low scoring matches.

Royal Challengers Bangalore, on the other hand, is completely opposite to them. High scores with some dashes of flamboyance here and there is what RCB is all about. In a way, the team is a personification of their captain, the one and only Virat Kohli. Despite him and AB de Villiers’ success with the bat over the years, the team has disappointed fans on more occasions than one. RCB is one of only three teams in IPL 2020 to have never won a season. They sure would like to change that stat this year.

Aaron Finch and Moeen Ali are other big names in the batting apart from the two mentioned already, and the bowling unit will be led by heavyweights like Dale Steyn, Chris Morris, and Yuzvendra Chahal. As always, the team looks sorted and balanced on paper of RCB.

For Sunrisers Hyderabad, Warner will be taking over the captaincy from Kiwi skipper Kane Williamson. This is sure to bring some change in the way SRH have played over the years. Kane Williamson will still be a part of the squad though, as his contribution to the team is not something management would like to let go of.

Warner along with Williamson, Manish Pandey and Bairstow make up for a strong batting unit. Rashid Khan, Siddharth Kaul and Bhuvneshwar Kumar take-up the bowling department. They are to miss the services of Shakib Al Hasan this year, and hoping to replace him with West Indian Allrounder Fabian Allen.

Can this year finally be RCB’s winning year? Will a change in the venue help them? Who is likely to win this contest the most? What do stars say for SRH & David Warner? Let’s find out.

Key players to watch out for SRH and RCB

According to Ganesha, the star players from the SRH team will be David Warner, Billy Stanlake, Kane Williamson, and Rashid Khan. While Chris Morris, AB de Villiers, Moeen Ali, Gurkeerat Mann Singh may pave the way for Royal Challengers Bangalore. Who do you think will win the toss? Read on.

As per Ganesha’s findings, Sunrisers Hyderabad is likely to win the toss against Royal Challengers Bangalore. Winning the toss generally is considered an advantage. But what do you think, will they also be able to beat the defending champions? Will losing the toss hamper the high spirits of Royal Challengers? Let’s find out what Ganesha has to say about the match.

Who is likely to win SRH vs RCB?

It’s time to find out what Ganesha has to say about who will win SRH Vs RCB! Without further ado, we should tell you that the one to take home the victory may be Sunrisers Hyderabad.