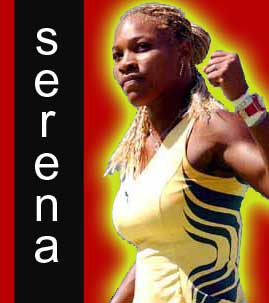 Introduction: Serena Jameka Williams is an American tennis player and has always been in the limelight for more than tennis reasons. From injury to personal tragedy, she fell so far down that she was not within an echoing distance of victory. She had been criticized for not putting enough attention to her tennis career but her victory in the U.S. Open seems to indicate a change. She is finally back and completed her climb to No. 1 on Sunday with a 6-4, 7-5 victory against Jelena Jankovic to claim her third U.S Open title.

Serena Williams, the younger sister of Venus Williams, just won the US Open Tennis Championship on September 7th, in an impressive comeback after losing to her elder sister in Wimbledon 2008.

Mars, the Lord of Ascendant is debilitated and still gives her the necessary power and fighting spirit. The miracle is due to cancellation of debilitation as Mars is exalted in the Navmansa chart and also forming Rajayoga with Rahu. So Mars is giving contrary-to expectations- results in her case.

Current planetary influences
At the time of Wimbledon 2008 she was running Rahu-Jupiter-Ketu period and Ketu is placed in the 10th house restricted her in the finals.

At the time of Beijing Olympics the transiting Sun was moving in Cancer in close conjunction with transiting Ketu. Sun is the Lord of 5th house(house of performance) very important for a sports person. As Sun was heavily afflicted she could not perform according to her own high standards and lost to Dementiva on 14th August when Sun was still moving in Cancer and could not win the single title for her country. But she managed to win GOLD for her country in doubles’ event with her elder sister on 17th August when the transiting Sun had just entered sign Leo which falls in the 5th house of her chart.

She is currently under the influence of Rahu-Jupiter-Venus period and as mentioned earlier Rahu is forming Rajayoga. Jupiter is also involved in the Rajayoga. Venus is very strong in her chart as it is placed in the it’s own sign and also very powerful in D-10 chart. Venus is placed in sign Libra and in Aries Navmansa. So the conjunction of Venus, the signifactor of sign and Mars, the significator of Navmansa in transit confer excellent results in US Open 2008. Mercury the Lord of 3rd house(house of enterprise) and also the Lord of 6th house(house of competition) was exalted and transiting Sun in the sign Leo has helped her to achieve the Title defeating her elder sister Venus.