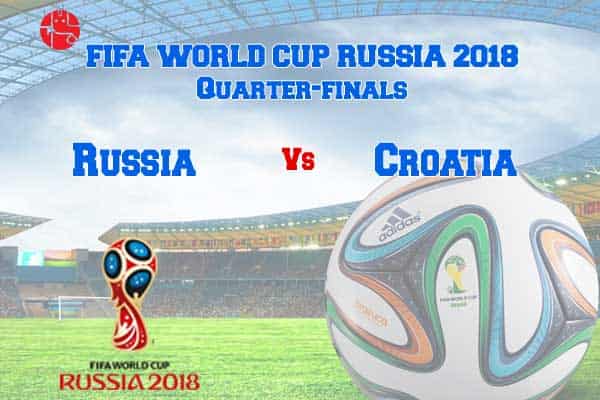 Another important match in the quarter-finals is between Russia and Croatia in this FIFA World Cup 2018. Russia has gained a lot of confidence after their match against Spain where they gave their best to not conceive any goals, which eventually took them to the penalty shoot-out. A class goalkeeping by Igor Akinfeev took Russia to the quarter-finals. Similarly, in spite of Denmark playing really well, Croatia did not lose hope until the end and won the penalty shoot-out to go through the quarter-finals of the World Cup. These two teams are going to face each other to play for the semi-finals in Sochi, Russia and make this FIFA 2018 all the more interesting.

Russia VS Croatia Match Prediction: About the Top Players’ Performance

Both the teams are in great shape and have performed quite well in their respective groups. Croatia has important players like Luka Modric, Ante Rebic, Ivan Rakitic, Marcelo Brozovic, Milan Badelj, Ivan Perisic and Mario Mandzukic. On the other hand, Russia has got talented players like Igor Akinfeev, Sergey Ignashevich, Denis Cheryshev, Alan Dzagoev, Yury Zhirkov, Alexander Samedov and Artem Dzyuba. Both Russia and Croatia may also make a couple of changes according to what game plan and tactics they will follow in the game.

Who Will Win Today, Russia or Croatia? Ganesha Predicts.

According to today’s match prediction using astrology, it is predicted that Russia will win this match against Croatia. In spite of Croatia performing really well in their previous matches in the group stage, their performance against Denmark was not up to the mark. Russia on the other side defended really well against their match against Spain. As per Ganesha, Russia will win this match and head towards the semi-finals in their home country.