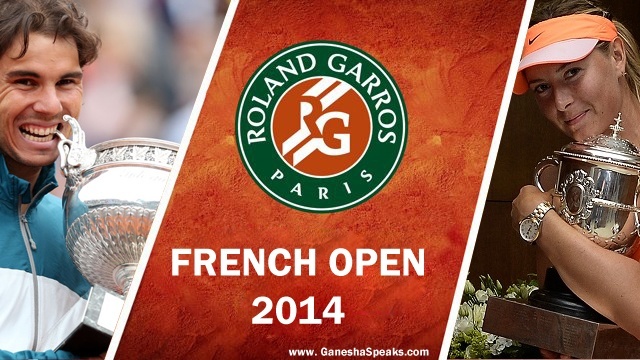 It is curtains downs on the amazing and closely-fought French Open 2014, a.k.a, Roland Garros Tennis Tournament 2014. The tournament had grabbed attention of the tennis lovers right from the beginning for all the right reasons. People were expecting close encounters between the top players of the tennis world and they were certainly not disappointed. And the two that remained unbeaten throughout this Grand Slam were – Rafael Nadal (Men’s singles) and Maria Sharapova (Women’s Singles) – who proved their superiority on the clay court.

We, at GaneshaSpeaks.com, had followed these tournament closely and predicted some of the key results, including the winners of the tournament, correctly. Here’s a report card of our predictions about the matches played during the final stages of the French Open 2014 (Singles category).

We had correctly predicted that Rafael Nadal will win the match.

We had correctly predicted that Novak Djokovic and Rafael Nadal would beat their rivals and reach finals.

The Semi Finals in the Women’s Singles category were – Maria Sharapova vs Eugenie Bouchard and Simona Halep vs Andrea Petkovic.

We had correctly predicted that Maria Sharapova and Simona Halep would win their matches.

We had correctly predicted that Andy Murray and Rafael Nadal would win their matches.

We had correctly predicted that Simona Halep would win.

We had correctly predicted that Djokovic and Gulbis would win their matches.

We had correctly predicted that Sharapova would win the match.

In an in-depth article about the top three players – Rafael Nadal, Novak Djokovic and Roger Federer – we had mentioned that the French Open would be for a tough challenge for Roger Federer.

” The study of Roger Federer’s Horoscope reveals that he is born with a Leo Ascendant. During the French Grand Slam tournament, Federer will be under the influence of the Mercury major period and the Sun sub period. Both the planets are placed in the 12th House in Roger’s Birth Chart. Rahu and Saturn both are currently transiting over his Moon, while Jupiter is transiting over his Natal Mars. The planet of vigour and vitality – Mars – and also the significator of sporting activities, will be transiting over Federer’s Jupiter and Saturn.

Keeping in view of the aforementioned transits, the energy level calculations are quite in Federer’s favour. However, the planetary transits and Dasha Bhuktis are not entirely in his favour.”

Federer lost against Ernests Gulbis on Sunday 1st June.
For Djokovic it was predicted that…

“…Djokovic is born with a Sagittarius Ascendant. He will be under the influence of the Ketu major period and the sub period of Rahu, during the ongoing French Open tournament. Ketu is transiting over his Natal Venus. Saturn and Rahu both are favourably transiting through the 11th House in his birth Chart. Like Federer, Jupiter is transiting over Djokovic’s Natal Mars. Mars, incidentally, is the prime astrological significator of aggressive or energetic sports. During this tournament, thus, Novak’s performance will remain above average. However, he may not be able to play, as per his own expectations. Chances of goof-ups are also present. He, though, may play well during some of the games, but may not be able to maintain grace and power throughout the tournament, feels Ganesha.”

In the same article about these three giants, it was clearly mentioned that the stars are more in Nadal’s favour.

“If we consider the Charts and stars of all the three players, Nadal has the strongest chances. However, predicting the actual winner depends on who plays against whom and also on the actual date of the play.”

Will the French Open reigning star Rafael Nadal manage to clinch the Roland-Garros men’s singles crown for the 9th time?