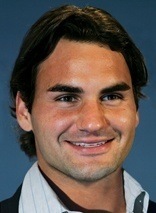 Roger Federer is a Swiss tennis professional currently ranked World No. 1. Many experts and his own peers believe Federer may be the greatest player in history.

He has Leo rising and Sun the Ascendant Lord is placed in the 12th house. Saturn and Jupiter conjunction is forming Raja Yoga in his chart.

On July 6, 2003, he defeated Mark Philippoussis and won his first Grand Slam title at Wimbledon as the first Swiss male player to do so. He was running Saturn-Rahu period at that time. Rahu is placed in the 12th house of his natal chart but in Virgo Navmansa and placed in the D-9 Ascendant. Adding to this, Sun and Rahu placed in the 10th house from Moon strengthen the house of profession. Saturn is placed in the 9th house and Rahu is in the 5th house of D-10 chart, lifting his career temendously.

Apply his karakamsha lagna Gemini to the birth chart and the picture becomes very much clear. Mars is in the Ascendant and Saturn-Jupiter is aspecting the 10th house (house of profession) strengthening the house enormously and securing his name in the list of all time greats.

He is currently under the influence of Saturn-Jupiter-Mars period. Saturn and Jupiter are placed well in the D-10 charts and Mars is aspecting the 6th house(house of competition).

Federer has always done well at the Wimbledon – he has won it four times and is on the verge of creating history. Wimbledon is always played in late June/early July while the Sun is in Gemini. This is Federer’s 11th house, where the Sun gets 4 Astkavarga points. So, the planetary influences are very much in his favor.

We wish him all the luck and may Lord Ganesha bless him!!!!!