Rahul Dravid: It’s not all over yet 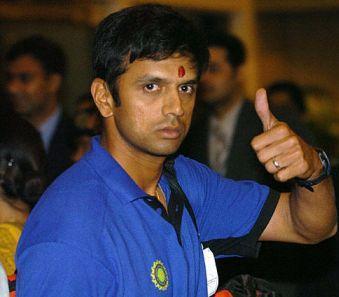 Dravid-“The Wall” of Indian cricket has resigned as an Indian Captain recently in a surprising move. In an earlier article, Ganesha has clearly mentioned that despite having all the potential to become a good leader he may not achieve the deserved success as a Captain due to conjunction of Sun and debilitated Rahu.

In October 2005, Rahul Dravid was appointed captain of the one-day side and began magnificently with a thumping 6-1 hammering of Sri Lanka in a home series, and was soon given captainship of the Test side as well. IT was Venus-Mars period, which has boosted his morale to great extent in year 2006 and rendered him excellent success as well.

But ever since he entered the Rahu Bhukti in January 2007, his position as a captain and as a player has come under scrutiny. No one can forget the world cup debacle of Indian Team. Rahu is a weak link in his chart. He is recently dropped from ODI series against Pakistan. He is currently under the influence of Venus-Rahu-Jupiter Bhukti and Jupiter is in close conjunction with debilitated Rahu. So, sudden reversal is very obvious. But this is not the end of his career. He will surely make a come back to Indian Team in series against Australia scheduled in December 2007. He will be under the influence of Venus-Rahu-Saturn period during that tour. Saturn happens to be the Lord of 12th house (house of distant place) in his chart and placed well in the D-10 chart. So, he will be surely picked for foreign tour. The transiting Jupiter would be moving in his favor from mid November this year. This will provide him much required support. So, there is no doubt about his come back but his performance will be mixed in the tour of Australia. We might see the old “Mr. Dependable” in full form from May 2008 and rest assured we will witness many stunning performances from this great fighter of Indian Cricket.

We wish him all the luck for his future endeavors.