Murali gets past Shane Warne in wicket-tally 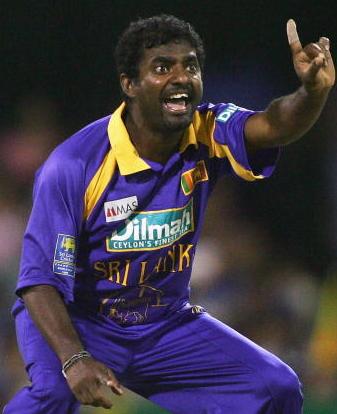 One of the greatest cricketers in the world, the player with the most debatable bowling style, the man with a kind-heart (he is an ambassador for the United Nations World Food Program and anti-poverty campaigner), Muttiah Murlitharan is one of the most successful off-spinners the world of cricket has ever seen.

Murali, as he is popularly known, has hit the headlines recently as he has left Australian leg-spinner Shane Warne behind in the wicket-tally. Murali has claimed 709 test wickets and topped the list of wicket-takers in the world. Ganesha would like to say something on this super spinner.

Muttiah Muralitharan was born on 17th April 1972 at Kandy, Sri Lanka. Muralitharan played his debut test match against Australia on Aug 28-Sept 2, 1992. In test cricket his average is nearly six wickets per Test.

As the birth details are not available, Ganesha considers Surya Kundali i.e. Sun in the first house. Ganesha feels that stellium of lord of the Ascendant i.e. Mars, lord of the 10th house of career i.e. Saturn and lord of the 2nd house of wealth i.e. Venus (significator of fame and wealth) is placed in 2nd house, which strengthens his horoscope and establishes him on the pedestal of popularity in world of cricket.

Ganesha feels that in Muralitharan’s chart, lord of the 3rd house of arm i.e. Mercury is placed in Pisces sign and dispositior of Mercury is Jupiter, which is occupying its own sign in 9th house of luck, which enables him to use his wrist artistically.

Muralitharan held the record in 2004 when he overtook West Indian fast bowler Courtney Walsh’s mark of 519 wickets; this was a great achievement for Muralitharan and since then there was no looking back for Muralitharan. A record was made for maximum wickets in the world. By taking 709 wickets he broke world record of Shane Warne.

Ganesha observes that on 3rd December 2007, transiting Moon was passing through Virgo sign and was in trine aspect with Natal Moon, lord of the Ascendant i.e. Mars and lord of the 10th house of career i.e. Saturn and Muralitharan struck during the third day’s play at his home ground of Asgiriya Stadium in Kandy and it was the Doosra that brought him the world record. When Paul Collingwood played down the wrong line to lose his middle-and-off stumps.