Time till January 2016 may be tough for the Captain Cool MS Dhoni, says Ganesha. 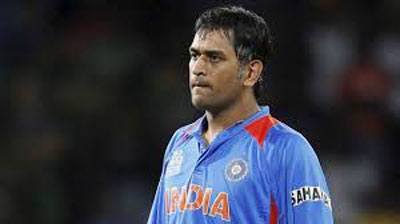 After facing a dismal defeat against Bangladesh, the Indian skipper, often known as one of the most successful captains to the Indian Cricket Team, M.S. Dhoni announced that he might step down from his position as the team leader in the limited-overs’ game format, a role he has so deftly played for almost a decade now, taking the Indian team through myriad significant triumphs, including the coveted ICC World Cup and T-20 World Cup victories. Naturally, this announcement raised plenty of speculation. Amidst the hoopla, GaneshaSpeaks took a fresh look at ‘Captain Cool’s’ Horoscope to predict that the going may remain tough for him till January 2016, post which he may be able to revive himself and his game. Here is a lowdown -
Mahendra Singh Dhoni ,  Indian Cricketer
Date of Birth :-  07th  July , 1981
Birth Time :-     11.11 A.M.. (Unconfirmed)
Place of Birth :- Ranchi ,Bihar (Jharkhand),India
NATAL CHART

M.S. Dhoni who announced his retirement from the test format earlier is still a popular and respected cricketer, but things have remained tough for him. Blame it on the ongoing Saturn Transit, says. Saturn, currently transiting through the Zodiac Sign Scorpio, is retrograde. In Dhoni’s Natal Chart, this Saturn transit, taking place through his 3rd House, is casting an adverse aspect on his Natal Mars. Mars is the natural signifier of aggressive, active sports. So, a negative influence on Dhoni’s Natal Mars, getting worse by Saturn’s retrograde movement (till August 2015) is making matters extremely tough for him.
Astrological Observations
Important Planetary Transits
Astrological Predictions
- Will the current team turn against Dhoni?
- Will Dhoni be able to retain his position as the team captain?
- Any addition, as per the latest developments
The GaneshaSpeaks.com Team
Share