Jo-Wilfried Tsonga - a by fluke winner or the one for keeps? Probes Ganesha! - GaneshaSpeaks
https://www.ganeshaspeaks.com

Jo-Wilfried Tsonga – a by fluke winner or the one for keeps? Probes Ganesha! 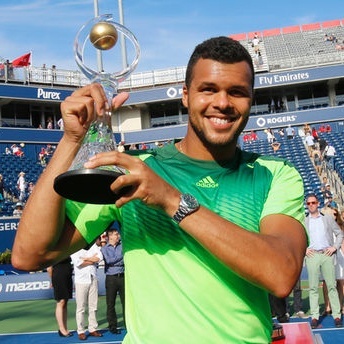 Jo-Wilfried Tsonga, the unsung hero of tennis, defeated four much-sung heroes of tennis – the top-ranked Novak Djokovic, No. 9 Andy Murray, No. 8 Grigor Dimitrov and No. 3 Roger Federer – to stunningly win perhaps his greatest victory in the game, and in the process became the first Frenchman to win the Rogers Cup in the Open Era, which concluded in Toronto recently. What makes the victory even more sweet is that he entered the Roger’s Cup this time not having defeated a top-10 player all season. Tsonga is ranked World No. 10. His career-high singles ranking is World No. 5, which he achieved in February 2012. He came into the limelight in 2008 when he reached the final of the Australian Open as an unseeded player. His best performances in a major tournament since 2008 are semifinal appearances in the 2010 Australian Open, the 2013 French Open and at Wimbledon in 2011 and 2012. He also reached the final of the 2011 ATP World Tour Finals, where he lost to five-time and defending champion Roger Federer.

Ganesha, with the help of Vedic astrology, tries to find out what the future holds for him.

In short, astrological readings indicate that Jo Wilfried Tsonga is a potent tennis player and is yet to win more titles. However, he will continue to see high and low phases in his career.