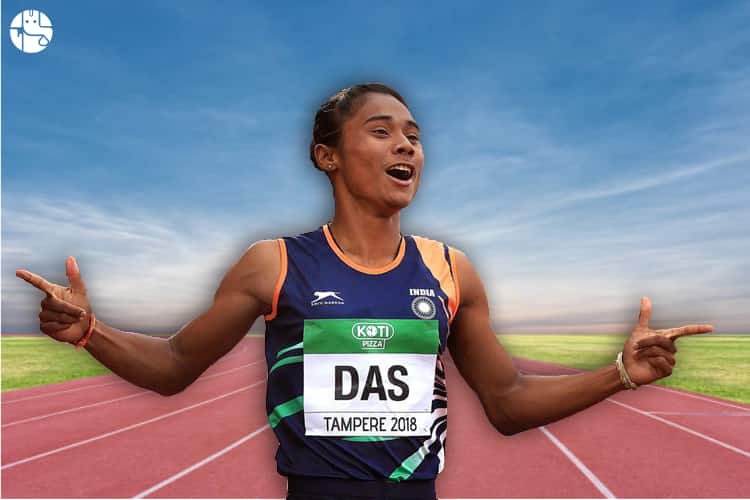 Popularly regarded as ‘Dhing Express’, the 19-year-old Indian sprinter Hima clinched her maiden gold medal of the year when she competed in the 200m race in Europe on July 2. She finished the race in 23.65 seconds at the Poznan Athletics Grand Prix in Poland to take the top honours.

Das continued her sensational form at the Kutno Athletics Meet in Poland on July 7 to claim her second international gold in women’s 200m where she clocked 23.97 seconds to clinch the gold.

Her third international triumph in 11 days came at the Kladno Memorial Athletics Meet in the Czech Republic on July 13, where the teenager clocked a much improved time of 23.43 seconds to win the gold. She has a personal best of 23.10 sec in 200m.

Das clinched her fourth gold of the fortnight when she once again won the 200m race at the Tabor Athletics Meet in the Czech Republic on July 17. She won in 23.25 seconds, inching closer to her personal best of 23.10 secs. This was Hima’s fourth gold since the start of July.

The ace Indian sprinter continued her dream run in Europe by claiming her fifth gold medal of the month with a top-place finish in the 400-meter race in Nove Mesto, the Czech Republic on July 2019. Though Hima clocked the season-best timings of 52.09s, it was a tad slower than her personal best of 50.79 seconds which she recorded at the 2018 Asian Games.

Hima also proved to be a shining light for Assam in their time of darkness when she announced that she would be donating half her monthly salary towards flood relief efforts in the state. She deposited her contribution in the Assam Chief Minister’s Relief Fund.

However, how will her future be? Read Ganesha’s prediction to know the answer to this question on the basis Hima Das’ birth chart:

Hima Das is born with mighty Sun in a dual-natured last of fire sign Sagittarius along with crafty Mercury. Strong Atmakaraka Sun drives Hima Das to become a sprinter and get recognized as a talented sprinter.
Sagittarius is adventurous yet philosophical, better known as – Archer. Most Archers are focused and goal-oriented. They aim to get the best in life and don’t prefer missing the bull’s eye.

Ruler of her Sun, Jupiter is in first of fire sign Aries along with debilitated and retrograde Saturn. Both are positioned in the fifth house. Jupiter stationed in the fifth house has aspect over mighty Sun and crafty Mercury. This position of Jupiter and its positive aspects give her a larger platform to perform and get recognized as a sprinter with the ability to run fast. Moon is in last of earth sign Capricorn in company with malefic Ketu. Debilitated and retrograde Saturn has an eye over Moon and malefic Ketu. This aspect of Saturn enables Hima Das to formulate a strategy to achieve her objective. Shadow planet Rahu is in a water sign Cancer and positioned in the eighth house from her Sun. Viewing this, Hima Das needs to remain much careful about health. Mars is in a fixed nature last of air sign Aquarius and positioned in the third house. In this way, Saturn and Mars exchange sign with each other. This position keeps Hima Das to remain strongly motivated to excel as a sprinter.

Effect of Transits by Major planets on Prospects of Hima Das in the 2020 Tokyo Olympics:

From around end of January 2020, Saturn enters own sign Capricorn. Saturn moves through the second house. Saturn moving through the second house crosses over natal position of Moon and malefic Ketu stationed therein. Viewing this, Hima Das will be facing tough conditions after January 2020. She has to exert more by accepting new challenges. She has to keep working over new challenges to achieve her objective about able to make the desired level of progress. This movement of Saturn seems challenging yet progressive as well.

Ruler of her Sun sign benevolent Jupiter will enter own sign Sagittarius from November 5, 2019. Jupiter transits in Sagittarius for most of the year 2020. Jupiter will move over her Sun and Mercury. This movement of Jupiter seems to support Hima Das to make encouraging progress by remaining ahead in the race like a sprinter and in turn get quoted medal and bring laurels for India. In the ensuing 2020 Tokyo Olympics, Hima Das can perform encouragingly.

Overall, the transit of two major planets in their sign during the 2020 Tokyo Olympics seems a sure sign for Hima Das to bring laurels for our country.

India is very proud of Hima Das’ phenomenal achievements over the last few days. Everyone is delighted that she has brought home five medals in various tournaments. Ganesha congratulates her and wishes her all the best for her future endeavours.