David Warner, the Australian southpaw known for his explosive stroke-play and crafty switch-hits, can annihilate any attack on his day. His incredible hand-eye coordination enables him to smash any ball out of the park, irrespective of the bowler’s reputation. He showcased his amazing batting skills by scoring a quick-fire 89 off 43 balls on his début against the intimidating South African attack. In IPL, he plays for the Delhi Daredevils team, which brags about the likes of Sehwag, Dilshan and De Villiers. And with David Warner joining its already destructive line-up, Delhi Daredevils is all set to give nightmares to opposition teams. 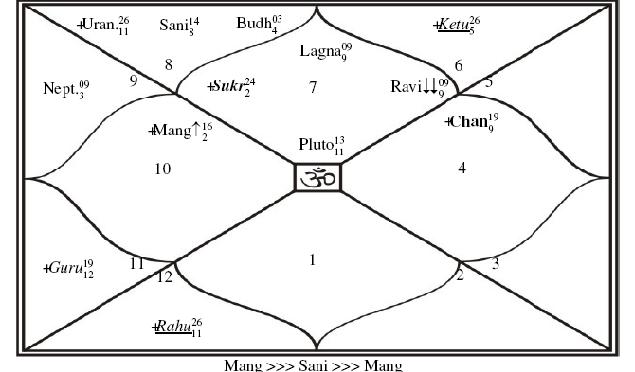 David Warner can be a formidable force in IPL-3. The transiting Mars conjunct Moon indicates that he will be very explosive as a batsman. The transiting Jupiter moving over the natal Jupiter indicates that his form will be amazing and his performance, remarkable. He will play well under pressure and will be given a free hand to play his own game. This freedom to play his natural game will help him in being innovative. He can be very dangerous for Delhi Daredevils’ opponents between 19th March and 9th April. His selection for Delhi Daredevils may have surprised many, but he has the batting skills to prove his critics wrong. Planetary influences indicate that he can be a Dark Horse for Delhi Daredevils.