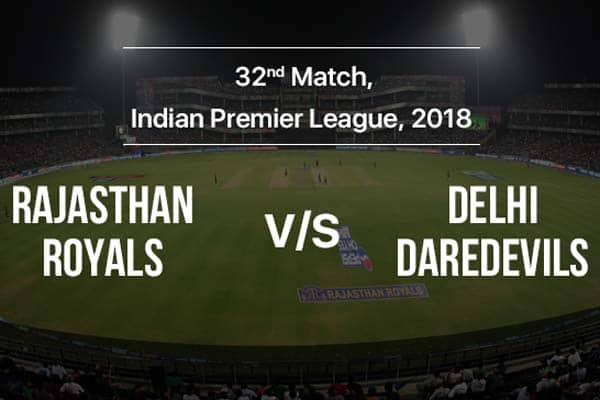 The Delhi Daredevils are in tatters, having lost 5 of their 6 matches in the IPL 2018 so far, and captain Gautam Gambhir has had to step down, not only because his team performed poorly but also because is own form with the bat has been equally poor. Now when they take on the might or Rajasthan Royals for the second time in this IPL, this time in an away encounter, their pathetic loss to the Rajasthan team in the first match on the 6th of April will haunt them. Being set a target of 71 to win off 6 overs in a rain-truncated match, Delhi managed only 60 for the loss of 4 wickets. The Royals, on the other hand, are much better off, having won 3 of their 6 matches so far, and playing their return match against the Delhi outfit at home, they will definitely look to dominate and increase their tally of wins. However, Ganesha has analysed the charts of both teams and predicts that Delhi Daredevils, though underdogs, will win the match.

Delhi Daredevils Are Down But Not Out

Rajasthan Royals Will Win The Toss

In many of the cricket matches, winning the toss gives a crucial head start. It boosts the psychology of the team which won the toss and also gives them strategic benefits. Well, our prediction is that Rajasthan Royals will win the toss. But will that make them win the match? Our prediction says Delhi Daredevils will win this match despite losing the toss.

Fortunes Will Change, Underdogs Will Make It

Like politics, cricket too is uncertain and unpredictable. The prospects of Delhi Daredevils winning this match are strong and high. This will be a shock to some and a pleasant surprise for some others. But eventually, it is cricket which will win.