Can CSK Defeat RCB In The 35th IPL Match On 5th May? Here Is What Ganesha Says 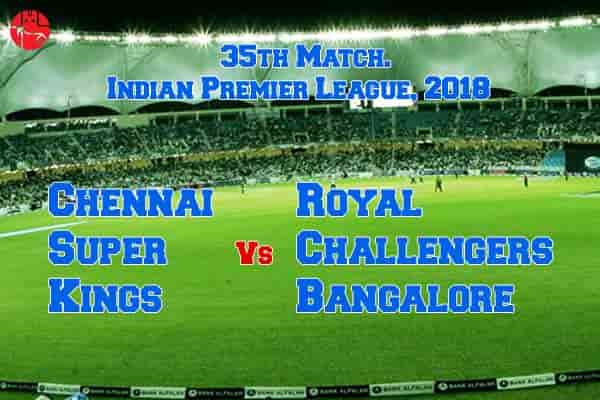 Chasing 2016 for victory against Royal Challengers Bangalore in their first encounter on April 24, MS Dhoni slammed a 34-ball 70 to guide his team Chennai Super Kings to a victory with two balls to spare in the IPL 2018 edition. CSK are sitting pretty with 12 points, while RCB are languishing behind with just 6 points. In their return encounter slated for Saturday 5th May, CSK will go in with a definite psychological advantage, and RCB will have to play out of their skins to win, but it would be injudicious to forget that their captain Virat Kohli is due for a big one. Having analysed the charts of both teams, Ganesha predicts who will win. To find out, read on:

Players Who Can Make A Difference

Chennai Super Kings will bank on C Bishnoi, MS Dhoni, N Jagadeesan to further improve their points tally, while Royal Challengers Bangalore will hope Virat Kohli hits form, besides counting on CJ Anderson and M Ashwin. Thus, we have strong players on both the sides. Certainly, it’s going to be an interesting match. Let us see which players and which team is going to clinch the victory and make their team shine brightly.

Are some issues bothering you in personal life? Buy our Remedial Solutions for Personal Issues Report and get the problem addressed.

Do you want improvement in your financial situation? Get the Free 2018 Finance Report and see the difference.

Well, as per Ganesha’s predictions, Chennai Kings will beat Royal Challengers Bangalore and surge ahead in this series. Thus, strong Chennai Super Kings will only get stronger.