Ricky Hatton, the English Boxer was ranked among the best pound for pound boxers in the world by Ring Magazine. He has won the IBF and IBO Light Welterweight Championship twice. His debut fight was on 11th September 1997 against Collin McAuley in Widnes at Kingsway Leisure Centre. Ganesha reads the books of astrology to predict his future in boxing.

Ricky Hatton was born on 6th October, 1978 in Stockport, Greater Manchester, England. Ricky is also known as The Hitman. 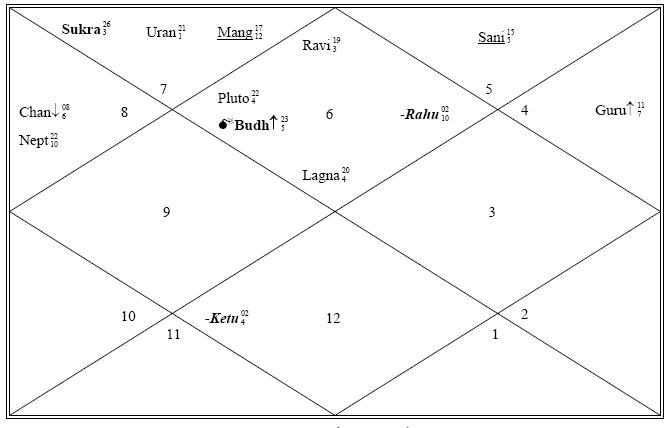 Ganesha feels that in Ricky Hatton’s chart, lord of the 10th house of career i.e. Mercury is in star of Mars and is occupying its own house in Ascendant, which is forming Panchmahapurush Yoga which has given him fame, fortune and a very successful career.

Ganesha feels that in Ricky Hatton’s chart, Venus and Mars are placed in Libra sign. Due to this planetary combination, Hatton’s entrance music is the Manchester City FC club song “Blue Moon” as performed by the band “Supra. In Ricky Hatton’s chart, Jupiter is placed in 11th house of friends, due to this planetary position; Wayne Rooney (Manchester United Player), Lee Rawsthorne and Joey Barton (Manchester City player) are his best friends.

Ganesha feels that ruler of Scorpio i.e. Pluto is placed in 1st house with lord of the 10th house of career i.e. Mercury, this conjunction gave him great courage and extreme power. Ricky Hatton is very quick, strong and resilient boxer. Ricky Hatton won 43 fights out of 44 and 31 by knock out of out of 43. In addition, Stellium of Venus, Mars and Uranus also reflect the strangeness in Ricky’s boxing career.

Ganesha observes that Ricky Hatton has played most of his fights when transiting Moon was in Cancer, Leo, Libra, Virgo and Sagittarius.

Ganesha feels that transiting Saturn and transiting Ketu are passing through 12th house over Natal Saturn, which indicates that period between January 2008 and April 2008 would be challenging. He would again have good career prospects after 1st May 2008. Ganesha advises Ricky Hatton to try avoiding fights, when transiting Moon is passing through Scorpio sign.

Wishing good luck to Ricky Hatton and May lord Ganesha bless him.