The Proteas returned home disappointed after a 2-1 loss in the ODI series against India. But AB de Villiers, stylish batsman and backbone of South Africa’s middle order, gave them something to cheer about. His back to back hundreds against a formidable opposition like India on their turf, goes to show his class as a batsman. And come this March, he returns to India to play for the Delhi Daredevils. Sharing the dressing room with power-hitters likes Sehwag, Gambhir and Dilshan, his elegant but aggressive style of batting is sure to gain lots of applause.
With IPL’s homecoming, Ganesha, using Vedic Astrology, predicts AB de Villiers’ performance in this IPL season. 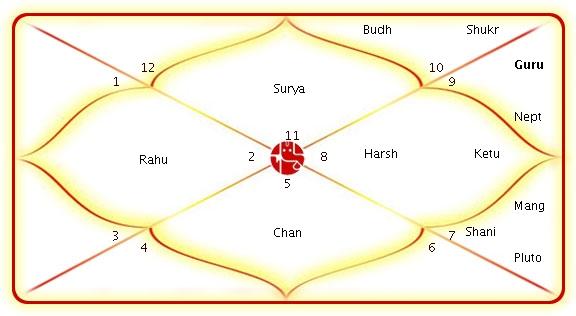 The flamboyant batsman and useful part time bowler and keeper from South Africa will gain immense planetary support during IPL-3. Progressive forces are likely to be on an overdrive around this time. He will display his all-round abilities by fulfilling vital roles. The transiting Jupiter conjunct natal Sun will elevate his confidence and ability to play vital knocks. His consistency with the bat will greatly contribute to the team. The transiting Mars indicates that his athletic fielding efforts will make him a crucial member of the team. However, he may face a few problems on account of transiting Saturn.