The stars seem to be tilting in favour of the incumbent TMC, but tough competition foreseen…

The stars seem to be tilting in favour of the incumbent TMC, but tough competition foreseen… 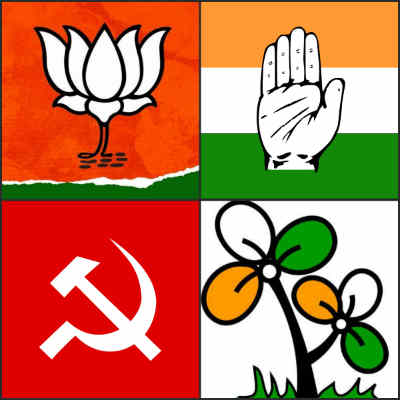 Let’s take a look at the probable fortunes of the individual parties:

Trinamool Congress (TMC)
As the transiting Jupiter is aspecting the natal Sun in foundation Chart of TMC, the Party will have an advantage during this assembly elections. Also, the planetary influences in the 1st, 3rd, 5th and 6th phase of the elections will remain favourable for the TMC. However, the transiting Saturn in Scorpio with Mars may cause problems and may also hamper the winning prospects, at least on some seats. The opposition parties may remain marginally ahead on 11th April, 21st April, 25th April.

Communist Party of India (Marxist) (CPI–M)
The transiting Jupiter will be eqaully favourable for the CPI(M) during these elections. It will definitely help the Left leaning party to recover some of the lost ground. However, the transiting Saturn in Scorpio with Mars will prove to be a major roadblock for the Party. It will not allow them to find the positive momentum that they are looking for. Planetary influences are favourable for the Party on the following dates: 11th April, 21st April and 25th April which will help them to regain some important seats.

Congress(I)
The transiting Jupiter travelling in a retrograde motion in Leo and in conjunction with Rahu will be adverse for the Party. However, the transiting Jupiter will be aspecting the Natal Sun which may help them to an extent. The party may win some important seats but their vote share may not increase. Hence, their performance may remain mediocre.

Bharatiya Janta Party (BJP)
Rahu in Leo will be affecting BJP in numerous ways. Also, the planetary influences on most of the voting dates are not highly favourable. Hence, BJP’s performance may not enthuse its supporters during this elections. Though the transiting Jupiter indicates that the Party may perfom well in some seats, the winning prospects are not strong enough.

The D-Day:
On the counting date, the transiting Moon will be passing through the Libra Sign in Chitra Nakshatra. Jupiter will then be in direct motion and in conjunction with Rahu. Saturn will be retrograde in conjunction with retrograde Mars. So, TMC is likely to emerge victorious in this Assembly elections. However, the vote share may decline which may result in reduction of seats. The Communist Party is likely to emerge as the second largest party and its seat tally may also increase. Congress would end up being the third largest party in the state with a slight reduction in seats. There will be not much hope for the BJP as the party may hardly win a few seats in the Assembly elections in the eastern state.