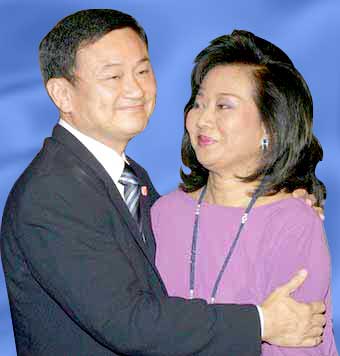 Introduction: Thaksin has applied for political asylum in Britain. As it is, he has spent most of the time there since he was forced to leave office two years back. He applied for the same in early August 2008. His wife Potjaman has also applied for asylum. Ganesha would like to envisage whether both Thaksin and his wife will be able to get it .

Planetary transits in Thaksin’s horoscope
Thaksin is under the influence of the second Saturn Return phase and the Ascendant of Saturn Return chart is Pisces. Ganesha would like to first throw light on the transits. Saturn is transiting over Venus and Saturn in the Natal chart. Rahu is transiting over the retrograde Jupiter and Ketu over Sun and Mercury. Moon’s position is not taken into consideration in this reading as Thaskin’s birth time is unavailable. These planetary transits are indicating restrictions and difficulties through the government, Ketu’s transit over Natal Sun makes it specific.

In Thaksin’s Saturn Return chart, Pisces Ascendant is rising. This sign Pisces in itself indicates a tendency to give up. Moreover, the Return chart has retrograde Jupiter opposite Natal Sun so the pattern of Sun Saturn opposition in the Natal chart is repeated here. Moon is weakly disposed in the 9th house of luck of the Saturn Return chart. 9th and 12th house Lord Mars and Saturn are conjunct aspecting the 12th house of distant places. Considering all these factors, Ganesha arrives to the conclusion that it will be very difficult for Thaksin to get political asylum in Britain. Long delays and difficulties are envisaged and ultimately his request (application) may be rejected after long contemplation by the British Government, says Ganesha.

Transits in Potjaman’s horoscope
Ganesha observes that Saturn is transiting through Square position from Potjaman’s Natal Sun, Saturn, Mercury and Rahu in Scorpio. Jupiter is aspecting transiting Saturn but after 7th December 2008 transiting Jupiter will not be aspecting transiting Saturn. Rahu and Ketu are passing through the third house and 9th house axis in the Surya Kundli. Saturn Square to her Stellium in Scorpio indicates stressful circumstances and great difficulties caused by the government. Transiting Jupiter is also not much in favour. Rahu is favouring her but again, transiting Saturn and Rahu are currently inconjunct and will remain in this position till the last quarter of 2009. Potjaman’s request may be considered but ultimately she will also face consequences and delays as negative planetary transits have heavily influenced her horoscope. As a result to this, it would be highly difficult for her to get the asylum in UK.

Will Thaksin get asylum in UK?
Thaksin’s permanent ticket to Britain or asylum is not so easy as both Thaksin and his wife are under the heavy influence of inimical planetary transits. They will have to wait for a very long time and the effort of seeking asylum in UK may go in vein as Thaksin has to face lots of troubles from the government during the Saturn Return phase he has just entered, specifically till the end of 2009.

Good luck and may Lord Ganesha bless Thaksin and Potjaman.