SP-Congress Alliance In UP Likely To Benefit Congress More Than SP, Feels Ganesha 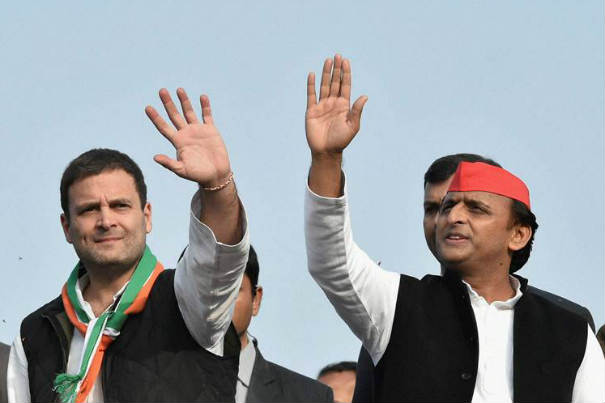 The triangular contest in the ongoing UP Assembly Polls 2017 is interesting and who will win is anybody’s guess. On one side is the Alliance between strange bedfellows SP and Congress, then there is Mayawati’s BSP, and fetching up the rear is Narendra Modi’s BJP, which may very well fetch up in front of all when the results are announced on March 11. BJP managed to win the 2014 Lok Sabha elections with a thumping majority, but this Assembly election is a different ballgame. Akhilesh Yadav of SP, after a bitter feud with his father Mulayam Singh Yadav, has entered an Alliance with Congress, and if their calculations come true, the SP-Congress Alliance in UP could very well be walking away with all the bouquets. Having analyzed the foundation chart of the Samajwadi Party, Ganesha, however, concludes that the Congress-SP Alliance will give a boost to Congress, but the SP is unlikely to benefit from it.

As per the SP’s foundation chart, the transiting Jupiter is passing through the 10th house over the natal Sun and Jupiter which indicates Samajwadi Party will try to put its best foot forward and would desperately want to retain power this time.

SP-Congress Alliance in UP: Saturn can play the spoilsport

But, the transiting Saturn is moving over the natal Moon and Rahu. It can prove a big hurdle for the Party. The party will be struggling to keep its vote bank intact. Also, the differences within the party leadership will be quite evident during this elections. Somehow SP’s political image will not encourage voters to vote in their favor.

Get Guidance For Career Issues With Career Ask A Question

SP-Congress Alliance in UP Elections 2017: Saturn will not favor the Alliance

Adding to this, the transiting Saturn is aspecting Mars and Ketu in the 7th house which may not augur well for the Party’s alliance with Congress.

SP-Congress Alliance in UP: Congress may reap some benefits from the Alliance in the UP Assembly polls 2017

Congress is passing through the Jupiter Mahadasha and Venus Bhukti. The Lord of 8th house (house of adversities and misfortune) Venus is placed with Sun in the 10th house. It may not bring any relief or great hopes for the Congress. However, the transiting Jupiter is passing through the 7th house, and hence Congress will get benefits of the Alliance.

Avail Financial Guidance With The Help Of 2017 Finance Report

Akhilesh’s personal charisma may boost his own chances…

… but not that of the SP-Congress Alliance, feels Ganesha. Considering the planetary influences in both the horoscopes, it is foreseen that Samajwadi Party will have to pay the price for this Alliance more than the Congress in UP elections. It will boost Congress Party’s winning prospects. The Alliance will not be able to derive the desired benefits. Akilesh Yadav’s chart is strong and his personal influence may boost his party’s chances and not that of the Alliance.