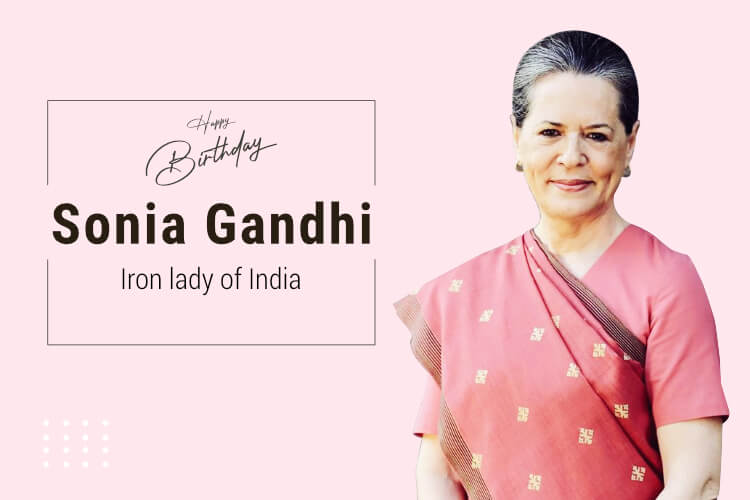 It is needless to say Congress president Sonia Gandhi is an Italian by birth, she has always been an Indian by karma. She has always stood for and fought for the idea of India as defined by the Constitution – an India which is a liberal, secular and progressive democracy.

Sonia Gandhi made her case at the time of her political ascent to her party’s leadership. “Though born in a foreign land, I chose India as my country.

Sonia Gandhi, a charming young lady who snagged a handsome prince Rajiv Gandhi, but also inherited the troubled history of his country. After the assassanation of her husband Rajiv Gandhi, Sonia Gandhi reluctantly followed the footsteps of the eminent Gandhi family and entered politics. The sudden death of her husband had broken her completely, but the Indian iron lady never gave up. For the sake of her children and the responsibility towards the country, she joined Indian National Congress party. She was the unanimous choice after the death of her husband and the Prime Minister of India, Rajiv Gandhi death but refused to be the P.M. of India. Instead she continued building up the Congress party. Despite all threats to her and her two children, she never ran away from her responsibilities for the nation and stayed here against all odds. To revive the party’s sagging fortunes after their electoral defeat in 1996, she joined the Congress Party as a primary member in the Calcutta Plenary Session in 1997. To end internal factionalism and with growing demand within the Congress, she was finally chosen as the President of the Congress in 1998. As a strong leader, she continually fought sexist barbs and attitude in an overwhelmingly male-dominant political environment. All her life, she faced malicious propaganda against her by RSS and BJP. But she has never been perturbed and has conducted herself with the utmost dignity. And always come out triumphant each time.

Now in her political journey she has come so far and became the ideal for many females, let’s have insights into what’s more is stored in her fortune after she turned 74 on 9th December 1946. So BRT, we will analyse the natal chart of Sonia Gandhi and reveal about her political stent and a lot more.

What’s in store, a stable career, high jump, or struggles in the upcoming year, find out now with the 2021 Career Report.

Sonia’s Gandhi as Interim Presidents is On Jeopardy.

She was born under the moon sign Cancer, thus she is currently under the influence of Venus Mahadasha and Venus Bhukti. Jupiter is the lord of the 6th house and is placed in the 4th house with Venus. Thus it makes her prone to some health issues. Her health may cause a major hurdle and even hamper her day to day activities. This grim situation may raise the difficulty in making any decisive move rendering interim president. But still, she will be able to dominate the Grand Old Party amid stiff competition.

What does your future aspect say about you? Get your Personalised Janampatri done and make sure you don't get bogged down by any hurdles.

The transit of Saturn in her birth chart is not seeming augur well for her. And this period may give rise to serious trouble in the form of obstruction, legal hassle, turbulence, and mental unrest. In this period, she may be constantly prone to controversies and even dragged into complications by her party leader. Her leadership and strategic skills may undergo a crippling test. However, she will make all efforts to restore the fortune of the party and play an active role till January 2022.

Sun is the Maraka planet in her chart, as it owns the second house. And the transit of Ketu over the Sun may not augur well for her. She might undergo serious trouble during the year 2021. Her energy level might need a frequent watch, and extra care would be required to prevent health complications.

How will your health be in 2021? Find out in the 2021 health report and get information regarding health compilation.

Sonia Gandhi’s alliance with their children seems not in collusion.

The transiting Ketu is passing through the 5th house. Thus this may give rise to some differences with her children on several issues. Also, the matter related to children may continue to cause tension this year. However, she will be under the influence of Venus Bhukti, and Jupiter forms an excellent combination with Venus in the 4th house. Thus this auspicious planet combination will make her tackle various problems.

We wish this great leader and a strong personality a very happy Birthday!