Smriti Irani Horoscope Analysis – Will The Textile Industry Rise Under A Bold Leader? 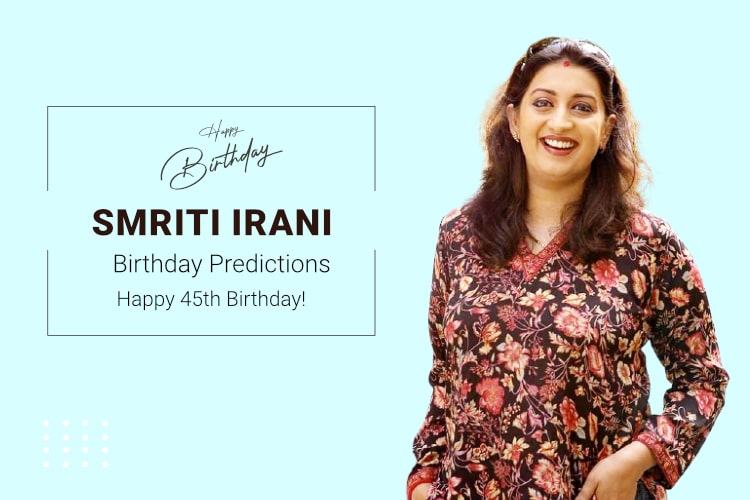 Union Minister for Women & Child Development and Textiles, former broadcasting minister of India, model, television actress, Smriti Irani needs no introduction. Her working career is so inspiring that even a biopic film would not be enough. She started selling beauty products, and then went on to participate in the beauty pageant Miss India. Before starting her career in modeling, she worked as a waitress and cleaner in McDonald’s. However, she is truly a bold and creative leader. Whenever it comes to speaking or expressing views, she speaks about democracy as well as sharing ‘Minions’ funny videos on her social media portals. Whether it’s about resolving tons of grievances or staying in the latest trend like; posting ‘Pawri Ho Rahi Hai’ on her official Instagram Id, ‘Tulsi’ Akka Smriti Irani Deserves long applause for wherever she is right now. Well, we have analyzed Smriti Irani’s Kundli for her fans. So without any ado, let’s start unveiling Smriti Irani’s birth horoscope predictions about her political career and much more.

Smriti’s Sun sign is Pisces, and her Moon Sign is Gemini, meaning that the actor turned into a politician is intellectual and possesses a great deal of knowledge. The Sun of Pisces is aspected by Saturn of Sagittarius. According to the Navamsa chart, the Lagna house or ascendant is occupied by Saturn, giving her a good height in politics. You can’t ignore her political achievements at any cost. She deserves to be called a wonder woman. Irani was appointed BJP National Secretary at the beginning of 2010 and was appointed BJP President on 24 June (BJP Women’s Wing of All India). Later on, in 2019, she won the election of Lok Sabha by defeating Congress President Rahul Gandhi.

Facing Tough Times? Get the most suitable astrological remedies to guard you against challenging times ahead!

Speaking about her modeling career, Parivartan Yoga of Mars and Venus where the latter was aspected by Jupiter helped her to get desired success in modeling. This combo of Mars, Venus, and Jupiter also enabled her to achieve favourable outcomes from the starting of her modeling career to participating in the Miss India contest. As a result, the famous TV actress of the 2000s continued to win the hearts of the audience. Despite belonging to the strict Punjabi-Bengali family, she decided to kick-start her modeling career. In 1998, she was serving Rahu Maha Dasha with Sun Antardasha. Therefore, she fell sort of winning the title of Miss India but earned enough fame, adding her name to the list of celebrities. Sometimes even not winning a competition, does not make you a loser at all. This is what she proved through her fighting spirit and courage. The reason behind this is that the Sun belongs to Saturn’s nakshatra, and Saturn is in the Sun’s nakshatra. This further clarifies why the former actress lost the competition. But as mentioned earlier, she didn’t choose to back off.

Smriti Irani’s career started during the Sun-Jupiter Dasha, and so she was successful to win the hearts of TV lovers when she appeared in one of the longest Tv serials. How can you not remember Tulsi’s character? Her character is still fresh in every mother’s imagination, ‘Kyunki Saas Bhi Kabhi Bahu Thi’ was next to an addiction to every Tv lover of Indian Families. She was married in 2001, when Mercury was the lord of the 7th house during the Sun-Mercury period.

From 2003 onwards, the planetary combinations in her Kundali made her way into politics, and she entered the political world during the great period of the Moon. The entry of a Woman who actually describes ‘Woman Empowerment’. However, in 2004, she was dragged into educational controversies when she served in the period of Moon-Rahu, and then in 2014, she was in the period of Mars-Rahu. From 2001 to 2010, she bagged multiple awards for her serial ‘Kyunki Saas Bhi Kabhi Bahu Thi’. In 2014, she was honoured with the ‘Best TV Personality of The Decade award’ by the Garv Indian TV Awards. And because of this, she was made national secretary. Also, she was the leader of the women’s alliance in 2010. In 2014, she lost the elections against Rahul Gandhi in Amethi but after giving a tough competition to him. Ups and downs come to champions after all! It’s also because she was serving the Mars-Rahu period, which gave her a negative result.

Why Worry About The Future When Your Astrology Predictions For 2021 Are Ready, Read Now!

As we say, victory comes to those who make efforts, the same goes with Smriti Irani kundli too. Rahu present in Jupiter’s nakshatra helped Smriti to take the throne of the Human Resource ministry during Modi’s government. She was the youngest lady to find the place inside the cabinet. Her Political Upward graph was just started. During the reshuffling of the cabinet, she became the minister of the textile. Smriti Irani was a member of the Standing Committee on Coal and Steel during the period of Mars-Rahu and Mars-Jupiter periods. Sounds inspirational, isn’t it? Thereafter, Jupiter’s presence in the Sagittarius made her minister of Women & Child Development.

Currently, she is under the major and minor period of Rahu. Jupiter will be moving to Aquarius in April, just like it was in 2011 and 2003. Transiting Rahu will be completing the period, which means that Smriti will complete 18 years of her political career and it will give her new ideas and opportunities. Believe it or not, it’s not just Narendra Bhai Modi who has risen from the poor Tea Stall, but Smriti Irani is yet another true example of exhibiting the power of democracy and empowerment of women.

Speaking about her current works, she developed a ‘Yashaswini scheme’ for women to become Atma Nirbhar and to get plenty of opportunities and help from the scheme. A new door of opportunities for all the women out there! In this scheme, women can apply for a loan of up to 5 lacs without any interest. And that’s why so many women are keen to get the benefit of this scheme in order to start their small business. After knowing this, we can just feel proud, proud, and proud. Speechless!

The government has decided to have made-in-India toys for children. Also, with the scheme of toyotathon 2021, the government has announced the prize of 50 lacs. Woohoo! In this scheme, schools, students, toys, experts, startups, and scientists can participate. From 12th February, it will be final and will be shortlisted until 25th February 2021. India will save 1 billion dollar rupees due to this, and it may hike national income too. Hence, the period of Rahu will have similar effects as of Jupiter on Smriti Irani.

Currently, transiting Saturn has the 10th aspect on the 8th house in Lagna kundali, and if we consider the Chandra Kundali, the 10th aspect of Saturn is on the 5th house. Saturn’s 2.5 year-long ‘Dhaiya’ (Mini Panoti) will remain till April 2022. From the position of Moon, Rahu in Taurus transiting over Mars and Saturn in the 12th house suggest that Smriti Irani may undergo an operation to recover her health. The Sun is also aspected by Saturn.

Due to the major period of Rahu with minor periods of Jupiter, Mars, and Sun, it is advised that she should take care of herself. Especially from April to July she needs to be careful. In short, she should not overlook her health throughout 2021. Irani Ji, it is advisable to protect yourself from not only Corona but various other diseases too. Needless to say that Smriti Irani is a great leader as well as a fighter! She may get engaged in the new work, she may work hard and achieve success too, but surprisingly, she may get desired success only from July 2022.

In regards to her marriage life, she will have a good time but may get worried about her children. She may also meet new opportunities and spend more money. Smriti Ji may get a bit worried about her younger siblings and father. She may have a fair time with her friends. Sad to say, but her excessive hope may not give her favourable results. Mars is in Rahu’s nakshatra, and therefore, Smriti may have to deal with ups and downs in her health. Now, she is in the major period of Rahu. Time for her to be extra careful!

Smriti Irani Birthday Special – An Open Frank Letter Based On Astrology, Fun-filled One

Disclaimer: The below letter is written just for fun purpose only. It does not intend to hurt anyone’s feelings or emotions. Its sole purpose is to maintain the line of fun with dignity.

Dear Smriti Irani Ji,
Hope you are rocking just like your social media handle. We are delighted and feel privileged, seeing your systematic work towards a better India. Now, coming to Astrology, you will have a gala time in February. In March, you may have more investments and mental stress too. Kind suggestion, keep your mind healing balm ready. April month is loaded with progress, while May may earn you a lot of fame and success. As we say, Winter always turns to spring. So, the struggle will be in June, while in July month, may need extra efforts to strengthen your position. However, if you have managed to win in July then August will be all yours. September-October will be again a fair time. On ending note, November-December, you may get desired results in terms of your respective work. Woohoo.

The most inspiring thing about Smriti Irani is, she always believed in herself. And that is what her star moves like. On her 45th birth anniversary, our sincere wishes are with her. May she shine even more and continue advancing. Many many happy returns of the day, Smrita Irani Ji!

Will You Get Fame & Recognition Like These Politicians? Know Your Future – Talk To Expert Astrologer Now!