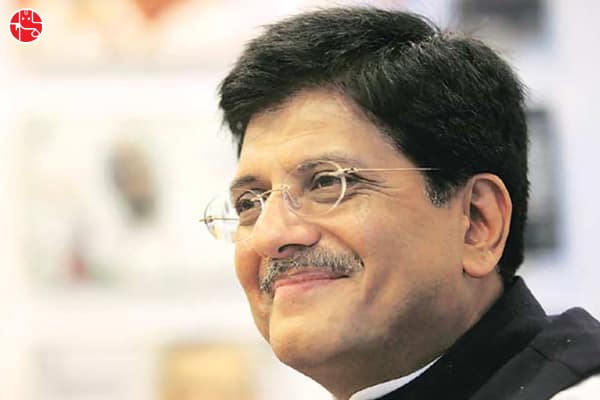 (Image Source: Internet)
The landslide victory of Narendra Modi-led Bharatiya Janta Party (BJP) in the 2014 Lok Sabha elections was nothing short of a miracle. Use of latest technology during the election campaign then was reckoned as an important reason for BJP's grand success. Well, the man who then headed the BJP’s Information Communication Campaign Committee and oversaw the publicity and advertising campaign of the party including the social media outreach was none other than Piyush Goyal. Goyal, who is now the Minister of Railways and Coal in the Government of India, played an important role in making BJP do phenomenally well in those elections. And now as he is the Railway Minister of India, people have pinned many hopes on him. Ganesha has probed his horoscope and analysed his future. Here are the findings:
Piyush Goyal
Date of Birth: June 13, 1964
Birth Time: Unavailable
Place of Birth: Mumbai, Maharashtra, India
Surya Kundli

Sun, Mars, and Mercury are in conjunction with the Taurus sign in Piyush Goyal's horoscope. This has made Piyush Goyal a highly dependable, efficient and ambitious person which is in accordance with his Zodiac sign Gemini. He has the abilities to excel in whatever assignment he takes up. If he fails to succeed in the first attempt, he tries again and again to achieve the desired success. He is bound to get success as difficulties will give in to repeated efforts as per Piyush Goyal's horoscope. This is his trademark. He is bestowed with immense abilities to perform and excel. This will help him in future. Piyush Goyal is destined to perform well. But do you have any queries for your career? Buy the Career Ask A Question Report and settle your doubt.

Creative Eye Will Help Him

Venus and Mercury are in an interchanged position in Piyush Goyal's horoscope. This means he works with a creative eye and loves to employ innovative steps to accomplish his goals. Failures, delays, and setbacks cannot dampen his spirit. His stars have made him an efficient financial manager and administrator. Besides, he is patient, persistent and a workaholic. Jupiter is in the 10th house from Moon. This means he has all the abilities and potential to do well as a Railway Minister.

The transiting Jupiter is moving in his favour. Thus, Piyush Goyal is likely to perform well in his new ministry. Also, the transiting Rahu indicates that he will take some radical steps to improve Indian Railways as per his horoscope predictions.However, transiting Saturn may create many difficulties and problems for him. Thus, he will try his level best but it won't be a cakewalk for him.

He will try to bring major changes in the Indian Railways in the period between December 2017 and April 2018 as per Piyush Goyal's predictions. The period beginning April 2018 may witness tremendous improvement in Railway's efficiency. Indian Railways will witness significant changes in passenger services. Thus, he will make a big positive difference to the Railways in the months to come according to Astrology. He will do good work for the railways in 2018. Do you want to know how will you perform in 2018? We can help you. Avail the 2018 Monthwise Overview Report and know your future.

Will Try To Implement Technological Upgradation

Piyush Goyal will take some radical steps in the Railways. He may even privatise certain areas. He may also outsource some important Railway project or work. He will plan technological upgradation and will try his level best to implement it in the Railways. Thus, technology may get a major boost during his tenure as Railway Minister. His focus will be on improving the speed of trains and he is likely to get remarkable success in this area, foresees Ganesha. He may even introduce high-speed trains connecting major cities of the country as per Piyush Goyal's horoscope analysis.

Safety Will Stay A Major Issue

At the same time, Piyush Goyal may face major challenges in the area of safety. Though he will introduce new technology to make railway travel safer, he may face several issues in this area. The duration between March 2018 and April 2018 will be a major headache for him in safety issues. Planetary positions indicate that the threat of accidents will loom large in the period between March and August 2018 as per his birth chart analysis. Also, Union issues and labour strikes will bother him between March 2018 and July 2018.

Piyush Goyal will be successful in attracting foreign investments. This will help in improving the Rail infrastructure. Efforts in this direction will get a boost in the time period between April 2018 and August 2018. Piyush Goyal will be able to make good improvements in the Railway network to meet the rising demand. Overall, he will perform well amidst stiff challenges and problems. Foreign investments also mean brisk business which can help India. But are you curious to know about your business? Get the Free 2018 Business Report and know about the future of your business.
With Ganesha's Grace,
Tanmay K. Thakar
The GaneshaSpeaks.com Team
To Get Your Personalised Solutions! Talk To Astrologer Now.
Share