Next five years of ‘Modi’fied Gujarat 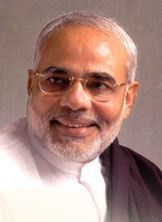 After a sweeping victory in Gujarat Elections 2007, Narendra Modi has ascended the throne as the Chief Minister of Gujarat. He has been elected as the Master of Gujarat (Gujarat no Nath, as he is known in the state) for the third time in a row. Unlike earlier elections when he was branded as messiah of Hindu community, Narendra Modi has won the elections in 2007 with the agenda of all-round development of Gujarat. Now the challenge is to take the Gujarat to the new heights across the India and globe. Will Narendra Modi be able to guide the Gujarat to the progress path? Ganesha gives his astrological analysis after examining horoscope of Narendra Modi.

Shree Narendra Modi is having Libra Ascendant with Scorpio Moon Sign. Natal Mars and Moon are conjunct in 2nd house in Scorpio, where Sun is conjunct with Ketu in 12th house. Ascendant Venus is Vargottam with Leo sign. Retrograde Jupiter is posited in fifth house.

Currently Shree Modi is passing through Sun Mahadasha. This Mahadasha will continue till October 5, 2012. Sun, being the lord of eleventh house, is posited in twelfth house with Ketu. Here Ganesha suggests him to offer Anjali to the rising Sun everyday with chanting “Gayatri Mantra”.

The overall year 2008 is quite good for Shree Modi due to the transit of Jupiter. With Jupiter in the Third House, he will find luck, ease of working and general good fortune coming through his expansive, optimistic, philosophical, refined, cheerful, sympathetic and well-educated mind. He can accumulate good income for Gujarat and the overall economy will be increased during the current year. Jupiter in the third house plays an important part in shaping a mentality that is optimistic, philosophic, and spiritually inclined. But, Ganesha feels that after April 2008, Ketu will be transiting through his tenth house. With Ketu in the Tenth House, he is likely to exert his energy and initiative by actively pursuing fame and social status. Courage, ambition, energy, enterprise, force, emotional involvement, business acumen and a strong compulsive drive for success may lead to public achievement or professional recognition. Over and above, he will under the influence of Sun-Rahu antardasha throughout the year. As suggested above, offering anjali to rising Sun is the best remedy for him.

Year 2009 is more decisive than previous year. Saturn will change its sign this year. Phase between August 2009 and November 2009 is very important. Shree Modi is having Saturn 29 degree with Leo, whereas Sun is having 00 degree in Virgo and Ketu is having 05 degree in Virgo in Natal chart. Transit of Saturn through these planets will play a major role. He may go to the Centre or he can have better position and status. Ganesha advises him to do “Laghurudri” during this phase. A Twelfth House Saturn suggests that his career or area of responsibility in the world relates in some way to work in seclusion, or for the care or education of others also.

But on the other hand Jupiter will be transiting over fourth house and will aspect twelfth house. So, the conjunction of these transiting malefic planets shall not give inauspicious results. A good social position is indicated due to the transit of Jupiter. Ganesha sees that Shree Modi will be under influence of Sun-Saturn mahadasha between October 5, 2009 and July 24, 2010. This period is not considered good due to the relationship between Sun and Saturn. So, Ganesaha advises him to perform “SuryaPuja” to avoid malefic effect of this minor period.

Saturn, being Yogakaraka shall not give more inauspicious results, feels Ganesha. The overall term is considered good for Shree Modi excluding some minor critical phases.

With the progress of Gujarat, Narendra Modi will be able to incorporate everything related to the development of the state. His decisions will have major effects on Gujarat’s economy, infrastructure, education, women empowerment and uplift of remote villages of the state.

If Narendra Modi follows the suggested remedies given by Ganesha during his five year tenure as CM, he would easily save himself from the malefic effects of planetary forces. Moreover, the remedy will also take him to the new heights in his political career. Ganesha does not surprise if Narendra Modi leads the union government in the years to come.