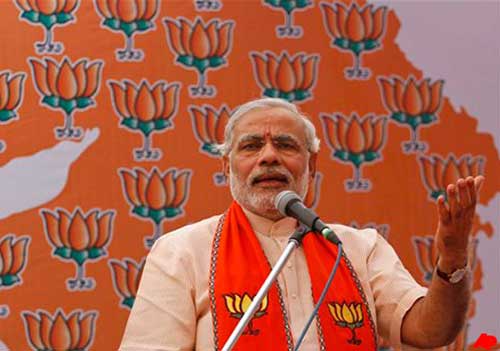 BJP stands strong chances of making it to the centre seat in LS Elections 2014, albeit only with strong coalition partners, quips GaneshaSpeaks.com! And, the award winning Astrology service further asserts that when that happens, BJP would have a lot to thank to Narendra Bhai Modi’s potent stars.

With 2014 Lok Sabha Elections’ battle-ground getting fiercer and prominent politicians already in full gear, it’s time to check the power-meter of the prime candidates and political parties. With a rebellious AAP and the formidable albeit inconsistent Kejriwal in picture, many equations look set to change. Yet, when it comes to popularity of any one candidate in these Elections, Mr. Narendra Modi seems to be ruling the roost. Will Mr. Modi manage to suitably impress India’s awakened masses? Will his party, the Bhartiya Janata Party, manage to make it to the centre, riding on Modi’s mass appeal? Well, the time can tell, and so can GaneshaSpeaks.com – India’s #1 and World #3 Astrology Services firm that read into the Astrological Charts of BJP as well as Mr. Narendra Modi. Following are the excerpts from the Astrological reading GaneshaSpeaks.com made –

Stars Speak – All in all, the astrological picture confirms that BJP will emerge in a prominent way in the coming national Elections. It will rule the natioanl conversation during general elections. And, it, in fact, is nearing the power at the center – but in a coalition. “In short, BJP will be able to form a government only with many coalition partners.”, asserts Ganeshaspeaks.com senior Astrologer Mr. Tanmay Thakar.

Stars Speak – So, the grass-roots’ leader is certain to contribute to a significant jump in the BJP’s Lok Sabha tally in the 2014 elections. In fact, the party is likely to climb to the top on Modi’s shoulders in these General elections. Plus, when that happens the chances of Modi becoming the PM of India are very strong.

Which Constituency Should Mr. Modi Contest from?
Considering the dates of polling in different states and relocation chart, Mr. Modi may be able to win a Lok-Sabha seat with a huge margin, if he decides to contest from Gandhinagar or Ahmedabad. He will also be able to win the seat, if contesting from Banaras (Varanasi). However, here it would be a tough contest for him, and the victory margin of votes shall be lower.

The Moot Point!
Despite Mr. Modi’s and BJP’s potent stars, GaneshaSpeaks.com’s Astrologer Mr. Malav Bhatt is of the view that female politicians would have a prominent role in forming the government at the centre, post the General Elections 2014. This is because, he continues, “Saturn and Rahu are posited in Libra, which is an indication of a strong influence of female politicians in the coming times.” Now, whose fortunes win is left to be seen!

Last, but not the least!
All said and done, GaneshaSpeaks.com’s Astrologers assert that the overall planetary picture at and around the time of the general elections too shall have a major impact on the final outcome and results. GaneshaSpeaks.com further notes that currently three major planets Saturn, Rahu are Mars are passing through Libra, and they are in Retrogression. “Rahu will be in adverse motion in April 2014, and the eclipse in April 2014 may also be quite adverse for India.” adds Mr. Thakar, Astrologer, GaneshaSpeaks. He maintains that owing to these planetary combinations, there may be untoward happenings or a terrorist attack between March and July 2014, which may significantly change the face of the 2014 Indian General elections.

May Lord Ganesha bless us and our world with peace and happiness. And, may the best man win!