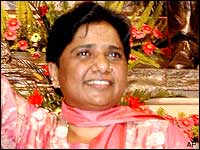 Mayawati- the Indian politician and Chief Minister of Uttar Pradesh has finally proved herself by getting listed as one of the top eight woman achievers by Newsweek Magazine. She is a Dalit (a caste considered low in India) by birth. Ganesha throws light on the reasons behind her receiving this honour.

The Indian politician and the BSP chief minister of Uttar Pradesh, Mayawati was born on 15th January 1956 in Delhi with rising Capricorn Ascendant. Its Lord is situated in the 11th house. She started her political career in 1984 while she was under the influence of sub period of Mercury and major period of Saturn. Mayawati was sworn in as chief minister of UP for the fourth time on 13 May 2007. Her announced agenda is focused on social justice through laws and other means for weaker sections, providing employment instead of distributing money to unemployed; her slogan is to make Uttar Pradesh into an Uttam (excellent) Pradesh. Moon and Mercury are Swagruhi in Navamansh chart. It shows high level of intelligence. Moreover, placement of Sun in the 1st house and its Antardasha indicate fame and name on national level. Currently, she is under the positive influence of Sun Antardasha in Venus Mahadasha which will be beneficial for her. As Sun the significator of reputation and name, she has been earning fame. From the mid of 2008 to July 2009, she will be under the influence of Moon Antardasha which is Swagruhi in Navamansh chart. This means she will shine more and will get more success in politics. She will get high social position in Uttar Pradesh. She is under the positive Sun Antardasha. Thus, Uttar Pradesh’s firebrand Chief Minister Mayawati has been profiled by the US magazine Newsweek amongst eight women leaders worldwide who have reached the top despite all odds.

Ganesha wishes her all the best for her future. May Lord Ganesha bless her with more such honours in future!