Mayawati Govt likely to complete term in UP 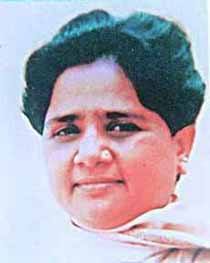 Political history of India has a new chapter in the name of Mayawati, the first Dalit woman Chief Minister of any Indian state. After much upheaval in Uttar Pradesh, Mayawati Kumari has ascended the throne. Starting her political career in 1984, she rose to the level of CM. She swore in on May 13, 2007. Ganesha would like to throw light on her political career.

The event chart has a Leo Ascendant, which is Sthira Rasi and the Lord of Ascendant Sun is exalted in the 9th house becomes strong, indicating full tenure of the Mayawati Govt in UP. But Ketu in the Ascendant is not desirable, indicative of inflexible approach in implementing policies.

Venus and Mercury are in exchange, indicating that people will be happy with the administration. It also indicates some popular policies from government for the welfare of common man.

Powerful 10th house with beneficial Jupiter aspecting the house seems good for government functioning. Her government may tackle adversities with diplomacy and will be able to gain people’s sympathy at crucial juncture. Venus in the 11th house and Moon the Lord of 11th house in the 8th house suggest that the Government will initiate welfare schemes especially for women and the downtrodden.

But the government may face disputes within the party and strong opposition and allegations due to the evil aspect of Mars and Saturn on the 2nd house.

Moon in the 8th house with Mars’ and Saturn’s aspect on the 6th house are not favorable for the government. Some harsh decisions may create strong opposition and administration may find itself in clutter.

The Ministry is currently under the influence of Saturn Dasha and Venus Bhukti. Venus is powerful in the chart and with Sun Bhukti to follow, government will implement its policies successfully and may stand firm against any opposition till July 2009. But the period between August 2009 and February 2011 seems tricky and we may witness some friction within the party and government, which lead to unstable political situation.

We wish all the luck to the people of Uttar Pradesh.