Enjoy the blessings of Jupiter and empower the Defense Set-up, says Ganesha to Manohar Parrikar... 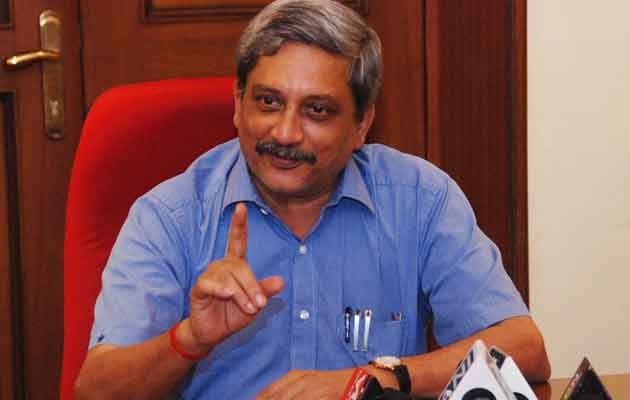 Manohar Parrikar- the Sharp and upright former CM of Goa and the current Union Defense Minister in the NDA Govt. completes his 6 months in office at the Centre. He was the first IIT graduate to become a CM of a state in India. He has taken exemplary decisions and has been performing outstandingly to empower the Defense set-up of the Country. He comes as a big change and is apparently being touted as the perfect man for the top-job, which has been, till now, getting mired in scams and other administrative inefficiencies, that have been causing a dent on the morale of the Defense Forces. His performance has been extraoridnary till now, with various Defense analysts and Chiefs lauding his performance. He has recently cleared Defense Projects of 1 Lakh Crore and has been on a decision-making spree! At this point, Ganesha thinking about the future of the Defense Set-up and Infrastructure of India, decided to take a peek at the stars of the Defense Minister himself. So let's see what Ganesha has to say.....
Date of Birth :-  13th December, 1955
Time of Birth :-  Not Known
Place of Birth :- Mapusa,Goa, India
SOLAR CHART

Owing to the unavailability of credible birth-time of the Minister, the predictions have been made on the basis of the Solar Chart, using the Birth Date and Place.
Astrological Observations:
Currently Jupiter is transiting through the 9th House of Manohar's Solar chart, till 14th July, 2015. It is aspecting the Planets occupying the 1st House- namely Sun, Moon, Saturn and Rahu.
After that, it will transit over the Natal Jupiter through the Sign of Leo and aspect the Planets posited in the  2nd House of his chart, who happen to be Mercury and Venus- placed in the Sign of Sagittarius.
Retrograde Saturn is transiting over the stellium of Sun, Moon, Saturn and Rahu, who happen to be in the 1st House of the Solar Chart and it is aspecting Ketu and Jupiter of the Solar Chart, till 1st August, 2015.
Rahu will be transiting over Jupiter, who is placed in the 10th House and Ketu will be transiting through the 4th House of his Solar chart, post January 2016.
Astrological Predictions :-
1) What do the Stars indicate for the Top-Performing Minister?
The current transit of Jupiter and its aspect on the Sun and Saturn of the 1st House of Solar Chart of Manohar Parrikar has bestowed upon him the required focus and discipline, which has helped him to excel in his  field,  .i.e. as a Defense Minister of India, in the NDA Government. The Sun is well placed in his solar chart, as he in his friend- Mars' sign Scorpio, which gives him great fame and the ability to be determined, focused, decisive and disciplined. This placement also gives him intuition and has  helped him to become a Top Performing Minister on the basis of his meritorious performance.
2) He has been performing well, so far, but will he be able to carry on the good work? Or do the Planets indicate some obstacles?
The transit of Jupiter through the Sign of Leo is much fruitful for him. His performance will be on the rise in the days to come, as the transiting Jupiter will be passing over the 10th House of Karma and the Planet placed therein- Jupiter -Lord of the 5th House(Performance) of the Solar Chart,  post  14th July,  2015. He  will be earning extraordinary fame and prominence due to his excellent performance as the Defense Minister. He will surely get the desired results for the policies or practices he has put in and it will bring beautiful rewards on its implementation in the days to come. Due to the adverse transit of Saturn, he may unnecessarily  get  embroiled in controversies, which may get created due to his strong decisions or because of a few misunderstandings or misinterpretation of his policies/plans.
3) Will he be able to bring in revolutionary changes in the Defense Infrastructure of India?
Ganesha feels that his performance will be beyond the expectations of people. Due to the positive planetary influences, he will be able to execute his plans well and he will be able to take revolutionary decisions relating to the Defense Structure of India. The transit of Jupiter and its aspect on Planets of the 1st House, especially  on Sun will give him intuition and the required push to implement new and innovative ideas for the Defense Forces. The Defense Forces will benefit a lot from his policies and decisions. The planets seem to be smiling on the Minister as regards his performance!
4) In what areas should he be careful?
Considering planetary transits mentioned above, Ganesha feels that, because of adverse effect of transit of Saturn and Rahu in his Solar chart he should adopt caution in his working system. He will have to deal with opposition parties and critics tactfully. More caution is advised post January 2016, perhaps if things are not dealt with wisely and with prudence,  they may create obstacles in his path. Besides all this, he must take care of his health. Of course, he will not get completely affected, owing to the positive influences of other planetary transits. Planets will give him due inspiration and courage to come out safely, Ganesha feels.
Ganesha wishes a great time ahead to the Defense Minister of India- Manohar Parrikar and hopes that his performance benefits India largely.
With Ganesha's Grace,
Rantidev A. Upadhyay
The GaneshaSpeaks.com Team
Share