Cheney should be careful of his health till Nov 2009 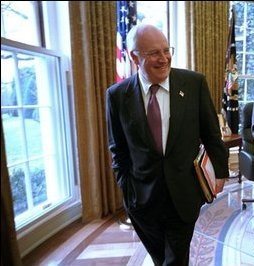 The 46th vice-president of United States, Richard Bruce `Dick’ Cheney found to have irregular heartbeats on Monday during a checkup for lingering cold symptoms. The 66-year old Cheney has been suffering from heart disease for a long time. He suffered his first heart attack way back in 1978, followed by three hits. He suffered his last attack in 2000, and most recently, in March 2007, he was in the hospital after a deep venous thrombosis.

Ganesha would like to throw some astrological light on this international personality.

As the birth time of Mr Cheney is not available, Ganesha considers Surya Kundali, i.e. Sun in the first house. Dick Cheney was born on January 30, 1941 at Lincoln (NE) with Aquarius sun sign. Ganesha notes that in Chalit Chart, lord of the 8th house i.e. Sun and lord of the 6th house of diseases i.e. Mercury are placed in Ascendant. Moreover, lord of the Ascendant i.e. Saturn is placed in enemy sign Aries and is debilitated; Cheney is facing health problems due to this planetary positions. 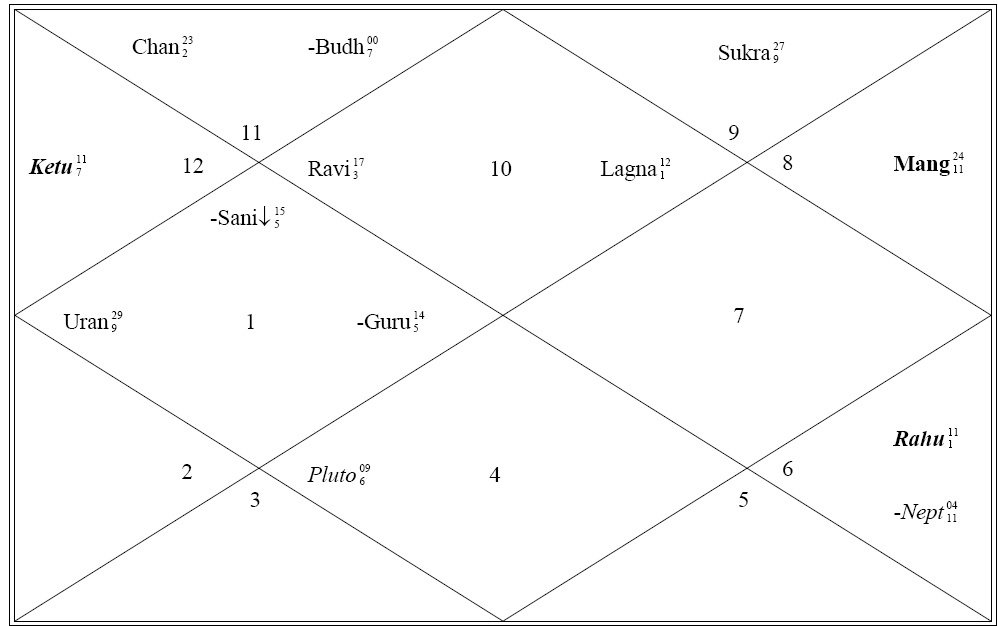 Ganesha feels that in Cheney’s chart, Jupiter is placed in 4th house of heart, which expands heart. In addition, debilitated Saturn is placed in 4th house and is in square aspect with Natal Sun, lord of the 6th house of diseases i.e. Mercury is in star of Mars, which is lord of the 4th house. This planetary position has given problems related to heart, irregular heart beat, heart pain and sudden heart attack.

As per Uttaraakalamrut Moon signify heart and Mars denote blood.

As per Horasara, Moon in Aquarius will cause Heart Disease and if Moon is in Aquarius sign, when Major period of Moon is running, native will face heart diseases.

As per Paladeepika, Rahu causes the palpitation of the heart and Moon signifies heart.

As per Indian Vedic system, Cancer represents heart, Cancer governs 4th house of Natural Zodiac. Sun governs Heart diseases, so Sun, Moon, Mars, Cancer Sin, 4th house, lord of the 4th house are afflicted by any malefic planets and is in any relation with 6th house of diseases and lord of the 6th house, gives diseases related to Heart.

Ganesha feels that in Cheney’s chart, lord of the 2nd house (house of habit) i.e. Saturn is debilitated and is placed in fiery sign and its depositor i.e. Mars is placed in 11th house in watery sign, which gives smoking and drinking habit. Transiting Saturn was passing through Capricorn sign over lord of the 8th house of accident. Lord of the 12th house of jail i.e. Jupiter and lord of the Ascendant i.e. Saturn are placed in 4th house in one degree tight orb, which gives imprisonment and in November 1962, Cheney was convicted for the first of two offenses of driving while intoxicated (DWI). According to the docket from the Municipal Court in Cheyenne, Wyoming, Cheney was arrested for drunkenness and, “operating a motor vehicle while intoxicated.” A Cheyenne Police Judge found Cheney guilty of the two charges. Cheney’s driving license was suspended for 30 days and he had to pay a $150 bond posted at the time of his arrest.