Know About The Importance Of Tulsi Vivah And Its Message 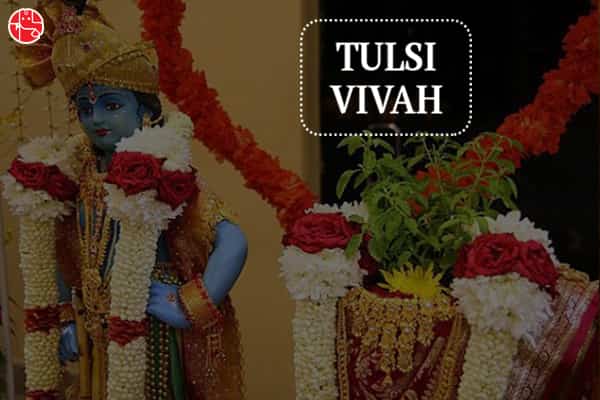 Tulsi, The Basil Plant Worshiped As A Goddess

Tulsi, also known as Basil, is a holy plant in India. This plant is considered to be a Goddess and worshiped daily. Indians offer food to this holy plant Tulsi before eating, and along with the food, we set aside Tulsi as a ritual to the Lord Vishnu. Tulsi is also considered to be a re-incarnation of Goddess Lakshmi.

Tulsi Vivah Is Celebrated On The 11th Day After Diwali

The Muhurat Or Auspicious Time Of Tulsi Vivah

The auspicious day of Tulsi Vivah this year is on 30th October, 2022. The muhurat of Tulsi marriage on this entire day is very auspicious and from this day marriage period in the Hindu religion begins. All the rituals of marriage as per Hindu wedding are performed on this day either at home or in a temple to celebrate Tulsi Vivah Festival.

Everybody, and mostly woman, in home keeps fast until this Hindu festival is finished on this day. This wedding signifies the end of the evil or inauspicious period of struggle, and the beginning of the auspicious phase.

The Dedication Of Vrunda To Her Demon Husband Jalandhar

The story behind this custom is unique and very inspiring. A girl named Vrinda used to worship Lord Vishnu and was a true devotee. She got married to a ‘Danav’ or demon Jalandhar and she was a dedicated woman towards her husband.

One day demon Jalandhar was going for a war and like a devoted wife, she worshiped for the protection of her husband’s life. She made an intention to perform pooja or worship until her husband came back from the war alive and for his long life.

Due to his wife’s devotion the demon Jalandhar became invincible. All the Devas or Good Spirits could not kill him and he was becoming powerful which was not good for the world. Therefore, all the Good Spirits came to ask Lord Vishnu for help. Lord Vishnu then appeared as demon Jalandhar in front of Vrinda and she immediately interrupted her worship which broke her intention.

The Curse Of Vrunda Turns Vishnu To Stone, Shaligram

Due to this, her husband demon Jalandhar got killed and his head fell off at home. Vrinda then realised that the person in front of her is not her husband. Lord Vishnu then appeared in his true look. Vrinda felt cheated and insulted due to which she immediately cursed Lord Vishnu and turned him into a stone. This stone is commonly known as Shaligram.

Tulsi Planted At Location Where Vrunda Chose To Become Sati

Later, everyone requested Vrinda to set Lord Vishnu free from this curse and she did. But, she burned herself with the head of demon Jalandhar and became Sati (immortal). In that particular place, a plant was grown which was named as Tulsi, a synonym for Vrinda.

Lord Vishnu Marries Vrunda In Her Next Life As Tulsi

As promised by Lord Vishnu to marry her in her next birth, on the Prabodhini Ekadashi stone Shaligram, an avatar of Lord Vishnu and Tulsi plant got married. From that day onwards Indians celebrate the self-sacrificial and devotional attitude of Tulsi.

Practical Takeaways From The Parable Of Tulsi

Do you know what is the practical advice we can take from this story and incorporate in our daily lives? The holy plant Tulsi never gave up on her faith and belief in herself. Tulsi made sure that she got what she wanted even though that meant she sacrifice herself for it. In the end, the Basil Plant’s great personality and willingness to do a selfless act for others were valued and remembered.

Tulsi’s Sacrifice And Selflessness Celebrated In Every Home

So, you should also remember that although Tulsi had a choice to think about herself and her happiness, she wanted to be of help to her husband and she thought of his good welfare. All this was not waste, Tulsi, the plant with medicinal properties, was recognised and her sacrifice is honoured in every home even today.

Tulsi Plant Decked Up For Marriage To Lord Vishnu

On this day, we put a sari on the Tulsi plant and clad it with all jewelery or accessories, and dress her up like a bride. A mandap is also created just for the wedding in front of Tulsi plant. The groom, Lord Vishnu’s idol or Shaligram stone or Lord Krishna’s image is kept beside her clan in a dhoti to celebrate the Tulsi Vivah Festival. The entire place is decorated with flowers and lightning. The Basil Plant and Lord Vishnu’s idol are surrounded with a mala of flowers. All the ceremonies of a real marriage are performed with Tulsi plant and Lord Vishnu’s Idol.