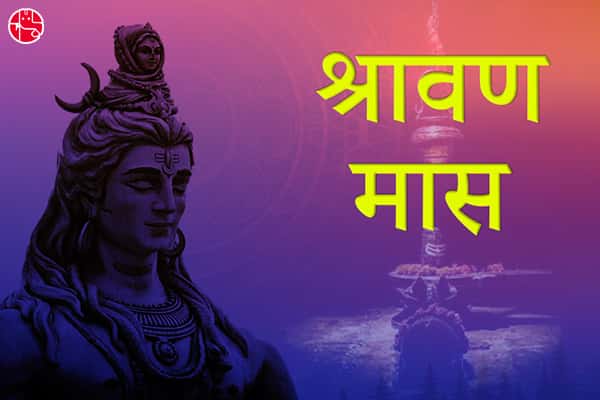 Shravan is the fifth month in the Hindu calendar. It comes after Ashadha month. Shravan month is a very important period for devout Hindus and they consider it to be the holiest month of the year. In fact, every day in the month of Shravan month is considered auspicious. It is believed that one can win the special grace of Lord Shiva and Lord Vishnu during this holy month. Shravan month, in particular, holds a lot of importance for the devotees of Lord Shiva. Lord Shiva is the God who bestows many boons. Will your life be blessed too? Know your future with Detailed Life Report.

The word “Shiva” connotes Kalyan (welfare). Lord Shiva is the main God in the worship of Panchadev (The Five Gods). Pushpadant has very well explained the glory of Lord Shiva in Shiv Mahima Stotra. He has said that in spite of being an eternal God, Lord Shiva has come to acquire the role of a creator, preserver and destroyer of this mundane world. Shiva is the cause of every living being’s existence. So, let us know some interesting facts related to the Holy Shravan month-:

The Significance Of Shravan Month

As per the traditional story, the daughter of Daksh had sacrificed her life and was reborn as Parvati in the home of Himalaya King. Parvati wanted to marry Lord Shiva. That is the reason why she performed penance during Shravan month. Lord Shiva was pleased with the devotion of Parvati and he fulfilled her wish. Lord Shiva likes the Shravan month very much as he got reunited with his wife during this period. Shravan month 2017 began on July 9. During the holy Shravan month, Shivaling is worshipped and people pray to Lord Shiva for the entire night. All this is done to win the special grace of Lord Shiva. Any act which violates the religious principles is strictly prohibited during Shravan month. It’s important to follow religion, to win the grace of God. It’s also important to please the planets, who are the agents of God. Is your life safeguarded against Rahu-Ketu? Find it out with Rahu-Ketu Transit Report For Career.

Monday is represented by Moon, which in turn symbolises Mind. Moon is placed on Lord Shiva’s head. Lord Shiva is believed to discipline the mind of the spiritual aspirant and the devotees. That is why Lord Shiva is especially worshipped on Monday. If you worship Shivaling on Shravan Monday, you can win his special grace. Men, women and especially unmarried girls fast on this day to please Lord Shiva.

Now, let us know how Lord Shiva is worshipped in Shravan month -:

Puja Procedure
While worshipping Lord Shiva, be seated facing the East. Thereafter, take some water in the right hand and make your wish. Meditate on Lord Shiva. Then, pour pure water over the Shivling. Pour the panchamrut on the Shivling and keep reciting the mantra Om Namah Shivaya. Then once again pour water over the Shivling and offer Akshat (uncooked rice) to the Shivling. Thereafter, place the sacred thread and Bel Patra and put the agarbatti (incense sticks). Offer sweets to the Lord and seek forgiving for the wrong deeds.

Things Which Are Considered Inauspicious In Lord Shiva Worship

Sindur or Kumkum: Scriptures tell us that we should not put kumkum or roli on the Shivling. Lord Shiva is a renunciant and destroyer, so it’s wrong to worship him with sindoor. Rather sandalwood paste is used to worship him.

Tulsi: Normally, tulsi is considered very auspicious but putting Tulsi on Lord Shiva is prohibited. It is believed that Lord Shiva had killed the husband of Tulsi, demon Jaalandhar. So, Tulsi is not put on Lord Shiva’s idol. There is another story that Lord Vishnu had accepted Tulsi as his wife. So, Tulsi leaves are not offered to Lord Shiva.