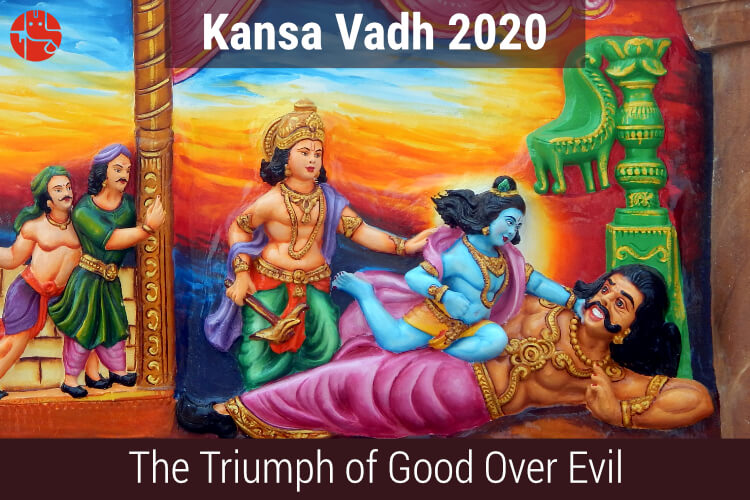 It goes without saying that good always triumphs over bad. Hindu religion consists of a few festivals to celebrate this wonderful sight! But now, we are talking about Shri Krishna’s beautiful Leela and the occurrence of Kansa Vadh. It is indeed a day when virtue defeats evil as Kansa was killed by Lord Krishna. This event marks the return of King Ugrasen to his former ruling authority in India. The Dashami Tithi of the Shukla Paksha in Kartik month observes the day of Kansa Vadh. You may also like to read why Dussehra is celebrated in a similar context.

This year, Kansa Vadh falls on the 3rd of November, 2022, Saturday.

You may also like to know about the Muhurats of Diwali and other related Festivals.

Ancient Hindu scripts discern Kansa as an immoral king who reigned over the areas of Mathura. He was put to death by Lord Vishnu’s 8th incarnation, Shri Krishna. As a result, he freed his parents and grandfather, who were under the captivity of Kansa. Thus, it led to the celebration of ‘Kansa Vadh’ where evil was destroyed with the reinstatement of morality in the universe. Hindus also refer to it as the winning of ‘Dharma over Adharma’.

People of India, particularly from Uttar Pradesh and Mathura celebrate this day on a large scale and with great vigour. The Chaturvedi community observes this occasion mainly. The term Chaturvedi indicates a person who has the knowledge of 4 Vedas. Moreover, members of this particular group who have moved to other regions in Indian visit their homeland Mathura to celebrate this day. This special event enables them to reunite with their Samaj and meet their close people.

The festival is celebrated during the month of Kartik on the day of Shukla Dashami. Hence, people of Chaturvedi community perform various rituals throughout 10 days after Diwali.

The day after Kansa Vadh is observed as Devuthana Ekadashi. People do Teen Van Parikrama in the region of Braj on this day. Mathura, Vrindavan and Garun Govind are the three towns included this way. Ancient scripts show that Lord Krishna did this circulation for releasing the offence of slaying Kansa. Hence, the tradition is continued actively by the people of Mathura on the following day of Kansa Vadh.

Rituals Followed On The Day Of Kansa Vadh

Want to solve problems in life? Get the benefits of an online Puja performed by expert Pandits and enjoy your life with peace and prosperity.

The followers of Lord Krishna see the occurrence of Kansa Vadh with a holy as well as virtuous significance. This is because the occasion marks the victory of good over bad. In the Hindu scriptures, Kansa is mentioned as the doer of many sins and Adharma when he was a king. But destiny had announced his killing by the 8th son of his sister, Devaki. Knowing this, he put his sister and her husband in jail. He kept on killing their offsprings once they were born.

Are you facing issues related to childbirth? Do away with these hindrances through Manually Written Solutions from specialised astrologers.

When Lord Krishna took birth, he was saved despite the attempts of Kansa. The night when the Lord was born, he was taken to the home of Yashoda Maiya and Nanda who stayed in Vrindavan. All the efforts of Kansa to assassinate Lord Krishna were going in vain one after the other. Ultimately, Shri Krishna conquered Kansa as an embodiment of Lord Vishnu and freed his parents from imprisonment. This marked the conclusion of all the wrongful acts and establishment of King Ugrasen as the ruler of Mathura. People started celebrating this day as ‘Kansa Vadh’ since then.