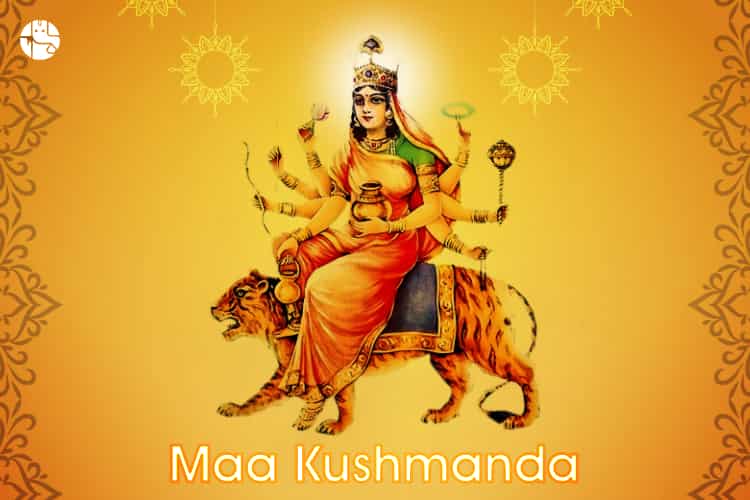 The fourth avatar amongst the Shakti Roopas is Maa Kushmanda. She will be worshipped on the fourth day of Navratri, i.e. September 29, 2022. The name Kushmanda means a little warm cosmic egg, which has originated from the following words. Ku means Little, and Ushm means Warmth, Heat or Energy, whereas Anda means the Cosmic Egg or Universe. Maa Kushmanda resides in the inner portion of the universe or Surya Lok, and she radiates a solar aura. It is believed that when only darkness prevailed all around, Goddess Kushmanda created the universe with her Sankalp, i.e. resolving power.

As per the religious scriptures, during the ancient times, Maa Shakti created this universe as an Anda which means cosmic egg, just by flashing a splendid smile. Bhima Parvat is the abode of Maa Kushmanda. She is also known as Ashta Bhujadhari – the goddess with eight arms. Maa Kushmanda holds a kamandalu, bow, arrow, lotus, a jar of nectar, discus, and mace in her seven hands, respectively. Whereas, there is a rosary (Japa mala) in the eighth hand, which is capable of bestowing the eight Siddhis and nine Nidhis. The lion is the vehicle of Goddess Kushmanda.

In the Sanskrit language, the word Kushmanda refers to a Pumpkin, as she likes it the most. Therefore, a pumpkin is offered to Maa Kushmanda as a ritual. While performing puja, all rituals should be observed with utmost accuracy to generate maximum benefits. If you are not fully aware of it, our experienced Pandits can perform a Personalised Puja with all the Vedic rituals and invocations, exclusive for you.

Muhurat Timings For the Fourth Day Of Navratri

On the 4th day of Navratri festival 2022, the mind of the worshipper enters the Anahata Chakra, wherein he/she should remain focused. Just by worshipping Maa Kushmanda, the devotee can get rid of all his/her ailments and sorrows. Moreover, he/she is blessed with a long life span, popularity, strength, and good health. Find all the wealth and prosperity with Shree Yantra, attuned and energised for you.

All About Maa Kushmanda: Mantra And Other Facts