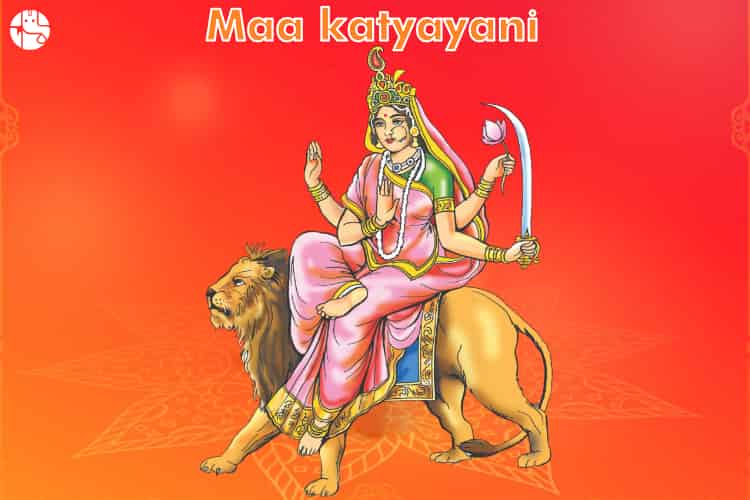 What is the Significance of Navratri Day 6?

Navratri 6th day’s goddess, Maa Katyayani is dressed in pink attire and wearing white rosary on her neck. She has four arms, and three eyes and a lion is her procession. In her upper left hand, she holds the weapon Sword while holding a Lotus Flower in the lower left hand. The right upper hand is in Abhaymudra pose while the lower right hand is in Varmudra.

The devotees, who worship the goddess with immense devotion, faith, and with pure mind lead to the ultimate accomplishments of Dharma, Artha, Kama, and Moksha. The girls, who worshipped Maa Katyani on the sixth day of Navratri pooja are blessed with the desired husband as they wish. Worshipping a Lagna Yog Yantra also helps to get rid of issues related to marriage and boosts relationships.

The Legend of Maa Katyayani

According to Hindu mythology, there was a sage named Katyayana who had a wish that Goddess Durga take birth as his daughter at his home, so he performed a hard penance to please God. After years of hard penance, God accepted his wish, and Goddess Durga was born to sage Katyayana’s Home on Dakshin Krishna Chaturdashi. That is why she is known by the name of Katyayani, all over the world. As she is believed to be the sixth avatar of Maa Durga, she is worshipped on the sixth day of Navratri. Given below are the date and timings for the day six of Navratri 2020 to worship Maa Katyayani.

If unsure how to perform puja at home, our expert Pandits can perform a personalised Puja exclusively for you, from the comfort of your home.

Goddess Katyayani is one of the violent Devi in the nine goddesses of Navratri. At the same time, she shows mercy upon devotees and blesses the devotees with affection and fulfils all their wishes. That is why it is believed that from Gopis of Mathura to Maa Sita and Princess Rukmani have worshipped Maa Katyayani for her blessings.