All About Adhik Maas – The Extra Month In Hindu Calendar 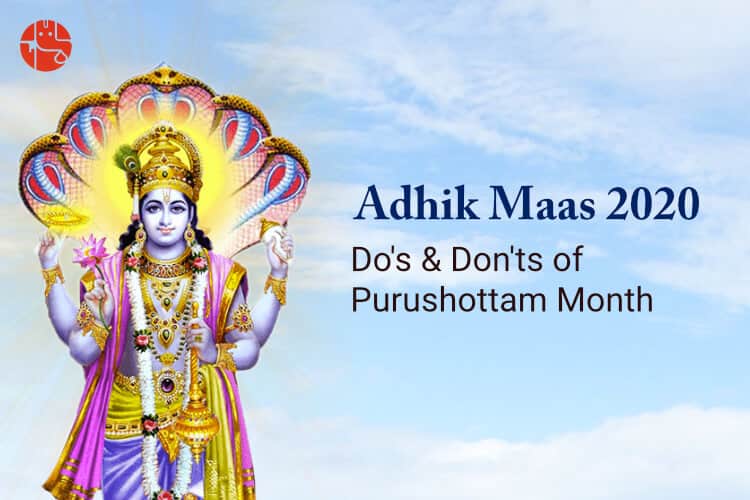 The festival season has started in India, and we have a different period approaching this month. Hindu calendar works a bit differently and has an additional month in it, namely Adhik Maas. This particular month is believed to be unfavourable. Hence, every type of auspicious work is avoided during this month. This month is also referred to as ‘Mal Maas’ or ‘Dhondyacha Mahina’ among people of various communities. As auspicious activities are not done this time, people observe religious fasts and perform related rituals during Adhik Maas.

Many religious rituals are performed by devotees throughout Purushottam month. These include: observing Vrat (fasting), narrating holy scriptures, chanting mantras, praying, conducting havan and related puja vidhi. Normally, Vrats of specific timelines such as weekly, half-day, full-day, fortnight, or a full month, are observed. You can observe the fast in different forms like taking only liquids or no liquids, consuming only fruits or vegetarian food, as per your tolerance. People say that those who accumulate Satkarma by doing the right deeds during this month triumph over their senses and come out completely from the cycle of life afterlife.

Purushottampuri is a village in Maharashtra which has a temple of Lord Purushottam. It is known to be a rare temple that is constructed using bricks and floats over water. Each time during Purushottam Maas, there is a fair arranged where people in huge numbers gather from different places and seek the Lord’s blessings.

Meaning And Significance Of Adhik Maas

As per Astrology, the Sun has its transitory movement in one star or zodiac sign each month. However, at the time of Purushottam month, it is motionless, and hence, Surya Sankranti does not occur during this period. This influences the motion of the Moon too, and the environment also goes through a change at this time. So, to stay away from the ill effects of these altering climatic conditions in terms of health, it is suggested to adhere to various promised devout observances and righteous deeds. Hence, Adhik Maas is an important month to be virtuous and avoid negative impacts.

During this month, devotees can observe fast, ‘Avachit Bhojan’, ‘Nakta Bhojan’ or take food only once. Those who are weak can hold one of the mentioned Vrats for 1 day during Adhik Maas. If you are unable to give donations/offerings during this period, you can give them during ‘Shukla’ and ‘Krishna’ time. This can be done on days such as Dwadashi, Chaturdashi, Krishna Ashtami, Navami, Poornima, Amavasya and on ‘Vyatipat’ and ‘Vaidhriti’ Yoga. You can follow below rituals during this time:

In case you are not able to follow these rituals, you can still seek blessings of God Purushottam in this month by performing Vishnu Puja with the recitation of Vishnu Sahasranama online and boost wealth and prosperity in life. Our renowned Pandits will perform puja with Shodashopachara steps along with Vedic process and hymns to appease Lord Vishnu in this inauspicious month.

To perform Vishnu Puja with accurate Vedic process at your convenience,

What To Avoid During Adhik Maas?

What Can Be Done During Adhik Maas?

As you need to avoid certain things during Purushottam Maas, there are a few things that are allowed. Here is the list of it:

Following rituals and observing Vrats with utmost devotion can take away obstacles from one’s path. Utilise this month to pay homage to Lord Purushottam and receive immense blessings in life.