The
beautiful, charming, and extrovert 'desi kudi' from the East is all
set to take her wedding vows with the smart, intelligent, and shy
'NRI munda' from the West. The tale starts with Manu (R Madhavan)
from London, coming down to India to see Tanu (Kangana Ranaut), a
prospective Indian bride. Their eyes meet, but habits don't. However,
Manu, a simple, shy guy is awed by the outgoing, bubbly Tanu, a
complete opposite (the typical, cliched 'opposites attract' theory).
The guy next door character that Madhavan portrays suits him, but
Kangana appears in an avatar like never before. This archetypal
Bollywood story, churned by debutante
director Aanand Rai, may
not, on surface, seem really 'different' to many, but then you never
know! The music of the movie too has not really topped any charts.
Since it's a classic great Indian wedding story, the audiences will
look forward to some foot tapping music and dance numbers along with
the usual twists and turns.
Hopefully, Jimmy Shergill and Ravi Kissen, the special invitees to
the wedding, will duly entertain the audiences and win them over.

The
'mismatch' ties the knot on 25th
February, 2011. Will the wedding of Tanu and Manu gather
enough 'baaraatis'? Will this wedding become a memorable one for all
those who attend it? Ganesha finds out with the help of Vedic
Astrology. 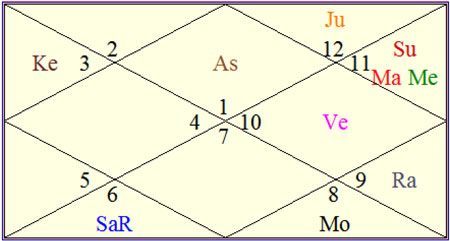 Good luck and may Lord Ganesha bless the cast and crew
of Tanu Weds Manu.