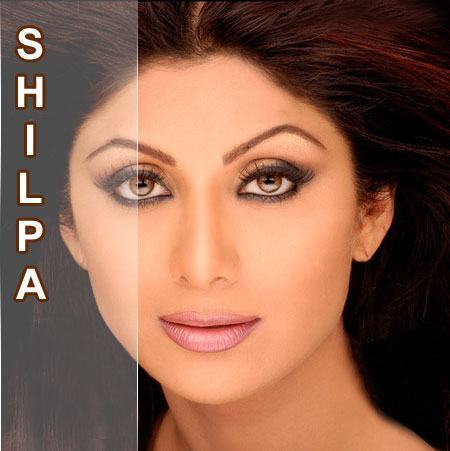 Shilpa Shetty, born in Tamil Nadu on June 8, 1975 is one of Bollywood’s glamorous actresses. She was first noticed in 1993 when she starred in a supporting actress role opposite actor Shah Rukh Khan in the hit film ‘Baazigar’. She was in controversies when she was kissed by Richard Gere at an AIDS awareness function.

Shilpa Shetty, the gorgeous South India-born actress of Bollywood who knows how to remain in the public eye through the media, has her birthday coming up on 8th June.

Following is Ganesha’s reading for her till her coming birthday.

Unfortunately as her birth time and place are not known we shall read her future based on Surya Kundali (Sun Sign Horoscope) considering the Sign Sun was (Vedic System) placed in on her birth date as the ascendant.

Notice the stellium of planets in the her ascendant and that too in the sign Taurus (Vrishabha). This stellium receives a square aspect of transiting Shani (Saturn) throughout the year. Such a Square aspect of a naturally malefic may not be a good influence on Shilpa but as Shani is a Yoga Karaka planet for her, Ganesha feels that contrary to the general belief, she will, after a tough and trying time and hard work, come out shining.

The planets that Shani aspects are the lords of her second house of family, the third house of efforts, the fourth house of home and the hearth as well as the fifth house of kids and creativity.

So what does Ganesha see here? An increase in her family, may be through her own marriage solemnizing in the coming twelve months. Her efforts to launch her own movie under her own production house S2 Global with herself in the lead role as an action heroine, will come to fruition and develop nicely. Her ignited creative faculties will entice her to have some ‘out of the box’ ideas for her film.

All this will be clean and clearly known and visible once her movie is released.

In fact Ganesha would advise her here to press on her film ventures and marriage in the coming twelve months to see and set herself in the future.

Ganesha notices that the first half of the year 2009, is when we will know publicly that she is marrying.

With Ketu transiting over her natal Sukra (Venus), Ganesha fears that she may develop some pessimistic tendency and shy away from people and media, however, as she is a natural Bull with her sun sign being Taurus, she will stomp the depressive and pessimistic feelings and come out with greater energy and gusto. July seems to be the period when she will have such negative emotions but come August and- ‘Lo and behold’- the charming lady will again be at her charming best.

Marriage talks and news will hit the media in October and November and plans will be made for her marriage in January or February of 2009.

Summarily, Ganesha feels that she will have a nice year ahead.

May Lord Ganesha bless her.