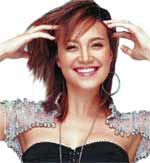 Tata Young is a known figure not only in Thailand but is now gaining popularity in Indian Cinemas too, with her song ‘Dhoom macha le’. Talking to Indiatimes, she disclosed that “One of my all time favourite Bollywood movies is Devdas. I especially liked that one scene in the movie where Paro is seen running with her saree sweeping across the floor. I would like to play the same character. And I want to work with SRK, he is so hot!”

Of course there is numerological comparison possible between the movie Devdas and Tata Young. Very simple, Tata Young’s Date of birth is 14, which totals down to 5, ruled by Mercury. Her name TATA YOUNG also totals to 5 and Devdas movie’s name also totals to 5. This is pretty evident, although someone may find it coincidental.

Ganesha observes that she has Venus in detrimental Sign Scorpio in her birth horoscope, as per Vedic Astrology System. Studying this the other way, she has Stellium of planets Venus, Sun and Mercury in Scorpio which aspects the sign Taurus which rules throat. Here, Ganesha would like to state that Venus’ aspect to its own sign and aspect of planets in Stellium to the sign Taurus has made her a good singer. As the Stellium is in Scorpio, she has husky and sexy voice.

In 2004, when Solar Return chart of 2003 December was in application, Venus was in Jupiter’s sign Sagittarius which is second sign from her Natal Venus’ sign. Jupiter the planet of expansion helped Venus’ force and she reaches out to Indian audience with the title song of famous and hit movie ‘Dhoom’. This is not the only factor why she became so popular for this song. The Lord of the year was Venus and Muntha Lord too was Venus which rules singing and glorious media like films and television etc. Muntha was in 1st house of the Return chart. Hence she could become so popular with this song.

The only reason Ganesha finds why Tata Young wishes to work with Shah Rukh is, as per Western Astrology, her Venus is in Scorpio and Shah Rukh’s Sun Sign is Scorpio. Venus rules arts and opposite sex related matters both.

Tata Young has a bright future in the field of singing and Ganesha foresees 2009 to be very important for her but even during 2008, her progress will be noteworthy. She also has scope of winning an award during 2009.