Success as statuesque as Sonakshi or as strong as Sallu? Not really – says Ganesha 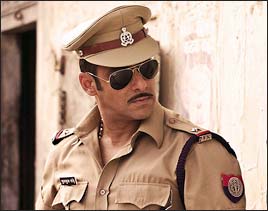 Yet another name to an already burgeoning list of the great-Indian-police-force centric Bollywood films is soon to be added this week. On Friday, September 10th 2010, Salmaan Khan and debutant Sonakshi Sinha starrer Dabangg is slated to release for the Indian junta. The title Dabangg, when
literally translated, means ‘fearless’ and ‘brazen’. Owing to the presence of Salman Khan in the role of a corrupt police officer Chulbul Pande aka Robinhood Pande, and its claims of being ‘different’ than run-of-the-mill cinema, the film has already succeeded in creating a lot of buzz. This unusually titled movie has been directed by the first time director Abhinav Kashyap – the younger brother of the noted director Anurag Kashyap. The script is
noted, as it claims to put the spotlight on the corrupt and repugnant system, and unlawful practices of authorities in the ailing states of Bihar and Uttar Pradesh.

Outand out a Salman Khan movie, produced by his brother Arbaaz Khan, with veteran actor turned politician Shatrughn Sinha’s daughter Sonakshi Sinha as film’s pretty leading lady, Dabangg has surely given rise to expectations that are sky-high. Will Salman be able to meet with an unprecedented success with the movie, or will he fall flat on his face? How will Dabangg fare on the collection meters? Finds out Ganesha with Vedic Astrology!