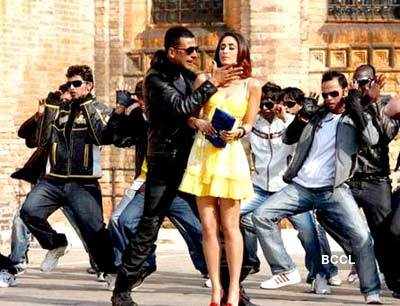 Akshay Kumar has had to fight many on-screen adversaries in the past, but the challenges posed in his forthcoming film Kambakkht Ishq are far more formidable. In the film, he first locks horns with Kareena Kapoor, nicknamed Barbie Doll by one of her designers for her svelte look in this film. Then he locks lips with her – an incredible 10 times.

The producers of the film have not only packed the film with a battery of Hollywood stars like Slyvester Stallone, Brandon Routh and Denise Richards, they have also made sure Akki gets to kiss one of them. No ‘pints’ for guessing that we’re talking about Hollywood sex siren of the 90s, Denise Richards, who has set the tone by conferring Akki with the title of a ‘good kisser’. However, Bebo is still mum on his kissing prowess!

With its release only a few days away, the film, which is based on the battle of sexes involving a shallow Hollywood stuntman and an ambitious model, has already generated a lot of curiosity in the film industry. It remains to be seen whether all this anticipation amounts to anything at the Box Office. Ganesha uses Numerology and Vedic Astrology System to predict the fate of this film.

Numerological Luck Factor
Ganesha notes that as per Chaldean Numerology, the sum of the film’s name, Kambakkht Ishq, is 33, which is a master number and has a major influence of the natural benefic planet Jupiter. Now, the sum of the constituents of 33 is 6, which is ruled by Venus, significator of arts and is again a natural benefic planet. Thus, the numerological luck factor is very strong. This indicates the film should have remarkable success at the Box Office. The release time chart, however, will also play a vital role.

Sarvashtakvarga of the Release Time Chart

Good luck and may Lord Ganesha bless the cast and crew of Kambakkht Ishq.