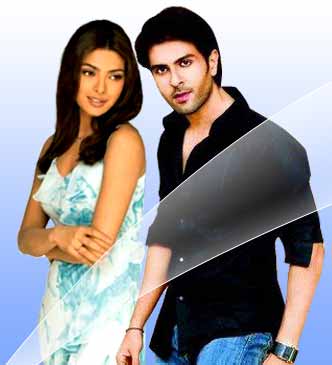 Lovebirds of Harry Baweja’s movie ‘Love Story 2050’ Priyanka Chopra and Harman Baweja have been seen cozying up at Mangie Ferra, a popular eatery at Juhu, Mumbai. They have also been seen meeting each other at many other secluded places in Mumbai. They are suspected to be in love with each other but is it true? Will they come out in the open and admit their love are they likely or is it just the hype being created for the success of the movie? Astrology throws spotlight on the matter.

Mutual planetary contacts in Harman and Priyanka’s charts
Ganesha observes that Harman has debilitated Venus in Virgo and Priyanka has Mars and Saturn in Virgo. Contact between Priyanka’s Mars and Harman’s Venus indicates strong physical attraction. They may not just be liking each other physically but there is good intellectual rapport between them because Priyanka has Mercury in Gemini – its own sign whereas Harman has Mercury in Libra forming Trine Aspect with Priyanka’s Mercury.

Will the couple come out in public or will they keep meeting each other secretly?
Venus will be transiting through Gemini from June 14, 2008 to July 07, 2008. This is the period when the couple may remain in news. Likewise, the period between August 26, 2008 to September 19, 2009 is also the period in which they might remain in limelight, feels Ganesha. However, both have Venus in the 12th house from their Natal Sun so they may not come out in public openly, instead they will prefer to continue the affair in a clandestine manner. Both of them have Venus in Mercury’s sign which is also the reason for mutual attraction but Mercury represents duality and instability too, notes Ganesha.

Will Priyanka and Harman’s relationship remain steady?
Ganesha observes that Harman has debilitated Venus with Saturn and Jupiter so he may not decide on marriage very soon. He may take a long time to contemplate the matter. As Venus is debilitated, he has scope of coming across more than one relationships in life. In Priyanka’s chart Venus is placed with Rahu and Mercury in Gemini. Here, Rahu indicates obstruction on the path of love relationships and Mercury conjunct Venus plus Venus’ disposition in dual sign Gemini indicates at least two strong love relationships in life. Harman’s chart doesn’t confirm high fidelity. Considering these points, Ganesha feels that this relationship is not very potent. Both of them have scope of having more than one relationships hence Ganesha doesn’t foresee them holding each other’s hand for a very long time. Their relationship may face ups and downs. Harman will remain focused on carer and he will have a practical attitude towards the relationship matters. Delayed marriage is foreseen in Harman’s case so currently with transiting Saturn’s aspect on his Natal Sun, he may be willing to do the hard work on the career front and may not be able to focus much on the relationship.

Good luck and may Lord Ganesha bless Priyanka and Harman.