Priety and Ness are made for each other

Introduction: Preity Zinta is the name that needs no introduction. She is an Indian celebrity, actress, and now a businesswoman. This Bollywood actress has recently declared that she is experiencing the magic of love and is on cloud nine. The man behind her happiness is none other than the business scion, Ness Wadia.

Ganesha foresees the future of their relationship through astrological analysis. 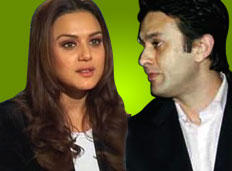 Astrological Analysis:
Ganesha does not have a proper time of birth so the following analysis is made by considering Sun Chart and Moon Chart.

Ness Wadia was born on May 30, 1970. Sun is posited in Taurus sign. Mars and Venus are in conjunct in Gemini whereas Saturn and Mercury are in Aries. Jupiter is retrograde in Libra and Rahu is in Aquarius. Ketu is transiting from fifth house in Moon Chart. He shall have a likeable, competitive and flamboyant temperament. There is a desire for creative endeavor, strenuous sports, athletics, risk-taking pursuits and other forms of muscular exercise – gambling may be a feature. Much pleasure shall be derived from his spontaneous affection, companionship and development. Ganesha advises him to be cautious regarding their relationship. Jupiter is transiting from the tenth house. After September 2008, Jupiter denotes a steady rise in life bringing honors, favors from superiors, public appointments, esteem and eventual social, political and financial success.

Preity was born on January 31, 1975. Sun is posited in Capricorn. Jupiter, Venus and Mercury are in conjunct in Aquarius. Mars and Saturn are in Sagittarius and Gemini respectively. Rahu is deposited in Scorpio. Saturn is transiting over the twelfth house from Natal Moon. Second house is under the aspect of the transiting Saturn. Her nature may incline to solitude, with a desire to work unpretentiously, unobserved and lives peacefully. She may have to face unexpected expenses. However, the transit of Jupiter shall bring peace of heart as well as better relationship with her love. General good fortune with Ness is foreseen, says Ganesha.

Conclusion:
Ganesha sees that for Ness Wadia the period after September 2008 may be good for business and financial matters. Saturn’s transit may harm Preity financially. The remedy for this is to offer some food and clothes to the beggars every Saturday near Hanumanjee Temple.