Despite a slow beginning, Phantom will pick up well and the performances will be highly appreciated! 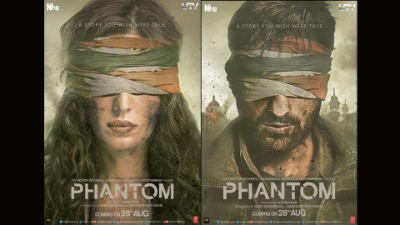 ‘Phantom’ – Kabir Khan’s ambitious next directorial venture after his tremendously successful Bajrangi Bhaijaan promises to be a sureshot thriller with intense action scenes, reportedly performed by Saif Ali Khan and Katrina Kaif – the lead actors themselves! The screenplay of the movie is written in coordination with author Hussain Zaidi’s book Mumbai Avengers on the aftermath of 26/11 Mumbai Attacks. Shot in various locations of the cities like Beirut in Lebanon, London, Vancouver – Canada, Gulmarg of Jammu and Kashmir, Punjab’s Malerkotla, Mumbai etc, the movie also may prove to be a visual treat the audiences. But what do the stars portend for the movie? Will the movie have a dream opening at the Box-Office? Ganesha predicts…

Ganesha wishes good luck to the cast and crew of ‘Phantom’